A Decade of Defiance - The Media Whores (Twenty Stone Blatt) 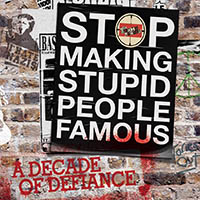 Their bid to become a sovereign state might have crashed and burned five years ago, and they still haven't worked out how to banish those Sassenachs* from north of Hadrian's Wall, but the Scots have never been short of a political opinion. Just put a pint of beer in front of an Edinburgher** - or a microphone in the case of The Media Whores - and you'll get your money's worth.

“A Decade of Defiance” is a compilation of tracks from The Media Whores' three albums and one EP, with three cuts thrown in to preview their forthcoming new long-player.

It runs the gamut of social commentary from wealth disparity (“Money”) to fracking (“Frack Off”) and privilege ("Class War".) The catchy, chorus-driven “Big Pharma” gives a middle finger to the medicines trade and “Can’t Say Whore on the Radio” rails against censorship. It’s punk with a sense of purpose.

And a liberal splash of sharp melodies and hooks. Lead guitarist on most of the tracks, Jimbo Macular, is an especially dab hand on his instrument - listen to the flamethrower fretwork on the bristling “Indiscretion”. He gets a bit tonally "out there" on "Predators" but nothing ventured, nothing gained. Vocalist-rhythm guitarist Craig Anderson can sure hold a tune and the engine room surges confidently.

How to characterise? There’s a touch of Dictators bombast, a lashing of Stiff Little Fingers energy and a dollop of Rezillos pop-punk smarts about this Decade, but just when you think you have The Media Whores figured, they throw in a curve ball like the jazz interlude “Black January”.

If you can't relate to the lyrical sentiment of "Vinyl Head", you've never frequented one of those disappearing institutions called a record shop. The snaking riff seals the deal.

Some of the production might make you wince occasionally but The Media Whores aren't one of one of your big budget, auto-tuned, sanitised acts. Their name doesn't get them much airplay and almost nobody makes money from streaming so let's make an eduicated guess that cheap and cheerful studios rule.

You might find "A Decade of Defiance" hard to find unless you're in the Northern Hemisphere, but you can easily hit up the band on Facebook. Don't be shy. And don't accuse these Scots of being frugal - there's a generous 18 songs on the CD, jock, so it's value.

And remember: “You can’t say whore on the radio but you can prostitute yourself from 9 to 5.”