Brass Knobs, Bevelled Edges (And In 25 Different Positions) - Green Circles (Off The Hip) 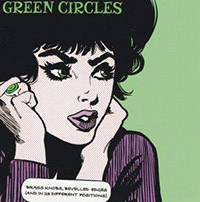 Fifteen years ago, this record from an Adelaide band sounded like one of the best pop rock records to have been crafted at Abbey Road in a hundred lifetimes. There's been a lot of water under the Albert Bridge since then but nothing's different today.

Don't know if any of The Green Circles members have been within a bull's roar of Abbey Road. Their album - the first in a string of worthy records - was put together in a more humble studio setting in Adelaide. Regardless of its origins, it's timeless, '60s-inspired greatness that's been re-issued, with bonus tracks, for a generation of fresh ears.

"Knee Jerk Reaction" kicks off the album with an onslaught of fuzz and an irresistible rhythm. It's pure pop with a cutting edge. "Colour Me There" is similarly fuzz-toned and sounds like one of the early Stems 45s on Citadel. The dynamics and hooks are firmly in place.

"Love Surrender" is atypical - it sounds like the Celibate Rifles in a lighter moment - but that's not to mark it down. "Given Time" reverts to form by bringing the jangle and marrying it to the warm glow of an organ.

"Brown House in Stepney" taps a Kinks vein with gated vocals and a bouncy rhythm. Ray Davies has an uncanny knack of making songs about simple things feel right and this one plays in the same space. A bold move and it pays off.

"Lena" flips the switch to fuzz but sounds underdone as a song. "Black Vinyl Heart" makes up for the filler and is something of a stylistic cornucopia, with surf licks and complicated chick pop lyrics. A live "Get On The Outside Of This" suffers slightly from the cleanness of being a desk recording but, my, doesn't this baby swing. The greasy harmonica doesn't detract, either.

You want winsome pop? "You Think I Don't Know" delivers in spades and would sit well on a Someloves record. "Jasmine T" is an obvious nod to the Beatles and comes in two flavours - the original mix and a "fulsome" one. Set the controls for backward masked guitars.