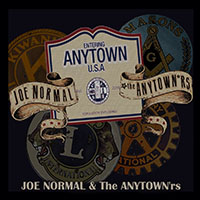 Like Broooce, Joe Normal and The Anytownr’s frontman Joe Normal grew up among the factories of New Jersey - before making  a break for L.A. So the bio says. And he’s landed on Pat (Lazy Cowgirls) Todd’s Rankoutsider Records.  Now you’re talking…

Excuse the generalisation, but sometimes America seems like a place where every rock and roll band wants to be from everywhere - as long as it’s Everywhere, USA. Where the musicians are plentiful, skilled and professional. Sometimes, too much so of the latter, but let's move on.

Joe Normal’s music wears blue collar shirts and resides in a mythical and shrinking town called Garage Pop. Most American rock and roll cycles back to the British Invasion and so does his. Opening track “Anytown” is a brash slice of evangelical, Cheap Trick style rock and roll, preaching the universal nature of rock and roll and the need to have a musical work ethic. Wise words before the venues all close. The “don’t give up dreaming” vibe is a bit clunky, but the song still shines. Mr Normal can sing.

“Nuthin’ (I Got Nothing)” is the best Broooce song that Springsprung never wrote. Drummer Tony Snow resides deep in the pocket and the song works its way around him. Normal and Michael Lockwood’s guitars spark. By comparison, “Into The City Tonight” is a sleeper, an earwig that embeds itself after a couple of listens. Props again to Normal and Lockwood.

The production is slick but not overly so. Obviously it's a taster to an album. Keep your ears peeled.