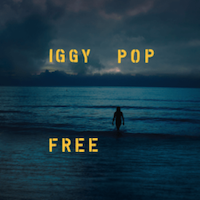 Let’s get the obvious ones out of the way first, shall we?.

Firstly, after what he’s done in the past, Iggy is entitled to play whatever music he wants. Any outstanding debts have been repaid. In full. And with interest. He can be as indulgent as he wants. Except for that cover of “Michelle”. Or “White Christmas”. Oh boy.

Secondly, if his solo career doesn’t stack up against what he did with the Stooges, that’s almost certainly because most other people’s best work doesn’t, either. Being an ex-Stooge can be both a blessing and a curse.

A handful of rock and roll artists/bands manage greatness with just one album or for a brief window of time. Fewer still keep it up for two or three records in succession or as a live performer, year after year. Iggy has made some great solo records and managed three classic albums in a row. He also became the greatest rock and roll frontman in history. Suck on that.

But let’s talk about the solo records. Put the “French” albums (“Apres” and “Préliminaires”) to one side for the moment. They were solely under Iggy’s name and reflected his own Francophile, literary or classic songbook obsessions. Let’s talk about side trips – the recording projects where he’s brought his own talent to the party but also leveraged substantially off the creativity of others.

If you think “Free” is some radical departure from what Iggy’s been doing, off and on, in terms of those side projects and collaborations, you haven’t been paying attention. Here are two more observations that you take or leave…

A recent listening diversion in the Bar has been a pair of MP3 playlists dug up online (via a defunct and wonderful site called Wilfred’s Wormholes, if you must know) and called “Iggy Rocks” and “Iggy Swings”. Both are collections of one-offs recorded with people like Boss Martians, Peaches, Buckethead, New Order, The BPA and Debbie Harry. Old stuff and new. Some of the material is tossed off, much of it is genuinely pushing an envelope.

The other thing you need to note is that Ig has been a regular BBC 6 DJ, hosting a show where he runs through music he’s been playing of late. I haven’t been following it but what’s obvious is that the Pop has an ear for contemporary sounds and eclectic tastes. A bit like the late Joe Strummer who showed his liking for world music via the public airwaves.

Thus, the idea of Iggy tapping the shoulders of people whose sounds he digs - principally guitarist Sarah Lipstate, aka Noveller, and trumpeter Leron Thomas - pitching them some homework (“I wanna do a song that sounds like this”) and setting (mostly) his own lyrics to their music isn’t that far-fetched, is it?

“Free” is ambient/jazz/spoken word/mood music. It’s full of deep grooves. Trumpets. Highly treated guitar sounds. Crooning. It’s not the Stooges. There’s no point trying to be. They’re over. You can’t top them. Iggy is as guilty of occasionally chasing stylistic trends at the behest of record companies as anyone (“Beat Em Up”, anyone?) and has come off second-best. So why go down that path again when, contractually speaking, you’re “free”?

“Free” is a musical shift of direction and much different to “Post Pop Depression”. For that one, he leant on a new muse in Josh Homme but laid down some sonic boundaries defined by his own Bowie-influenced late ‘70s sounds. It was a project that had a beginning, a middle and an end. “Free” strips away those rock trappings, shoots for a reflective almost sombre mood, and feels more organic and open-ended.

You won’t find the solution to the meaning of life in “Free” so don’t look for it. Lyrical non-sequiturs abound and confound. Who wants to take Iggy at face value? Occasionally - I’m looking at you, “Sonali”- the words sound forced and clumsy. Or calculated to show that he hasn't really grown up, after all.

You can take issue with  aspects of “Free”. The two spoken word pieces seem like an after-thought – I mean they’re Dylan Thomas and Lou Reed’s lyrics, not even Iggy’s. There’s a sneaking suspicion that the record’s main protagonist has run out of things to say. Or he can’t be arsed saying them. The title track is scarcely a song. More a mood. And the record is succinct, clocking in at barely more than 30 minutes. Iggy sounds a little beaten. Or relieved to be free.

Is a track like “James Bond” lacking in ambition with its simple structure and economy of lyrics or is it just sneakily playing with you? You’ll have to make your own call. After initially giving it a “meh” rating, it’s since laid claim to being a “grower”. “Love’s Missing” has a great groove. Iggy’s singular crooning is as good as it gets.

Throughout the record, Leron Thomas and Noveller are distinctive presences and not just wallpaper. Certainly not Neighbourhood Threats which, by all accounts, at times reduced past Pop collaborators to disposable sidemen. More like equals.

So the verdict? Oh yeah, that. Stooges obsessives (guilty as charged) may not get it but the little girls (and some of their parents) will understand. “Free” won’t go down as the most substantial thing in Iggy’s extensive and sometimes frustrating body-of-work, but he probably won’t care and probably nor should you.