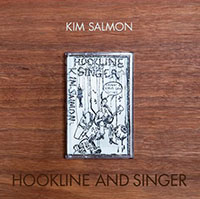 Thankfully the commentary and dirty looks subsided and we enjoyed the rest of Salmon’s set. When Salmon said he had some live cassettes to sell, I picked one up (my recollection is that the cassette cost me $5; last time I put it in the stereo, it played just fine – as for the relationship, it was all over within a couple of months).

The cassette in question, "Hookline and Singer", was recorded at the Great Britain Hotel in Richmond, Victoria, during Salmon’s solo residency in February 1992. Now, 27 years after the show was originally recorded, "Hookline and Singer" has been released on vinyl by Brisbane’s Tym Records.

The record is a mixture of Scientists, Surrealists, Salmon-penned Beasts of Bourbon and well-chosen covers. The solo setting is ideal for the sociopathic edge of "Travis" (inspired by Robert De Niro’s character in Taxi Driver) and the nocturnal reassurance of "Desensitised". The Scientists’ "Swampland" engulfs you in its nine-parts-water-one-part-sand composition and "Rose Coloured Windscreen" is even more beautiful than the "Sin Factory" version, if only that’s possible.

For me, the highlights were always hearing the notional Beasts of Bourbon tracks as Salmon most likely wanted them to appear. "Words From a Woman to Her Man" and "Something to Lean On" are two sides of the same emotional breakdown coin (Spencer Jones once joked that he and Brian Hooper may have been the "drunken bores" referred to in Salmon’s lyrics).

The Beasts of Bourbon version of "Something to Lean On" on "The Low Road" was always something of a let down compared to the Surrealists’ version (found on the "Non-Stop Action Groove" EP); to listen to the stripped back version here is to revisit the fraught journey of every painful relationship drama you’ve ever experienced. Another Beasts-recorded track, "There’s a Virus Going Round" outflanks its "Low Road" incarnation and finds itself in The Scientists’ swamp-filled territory.

"Cool Fire" is a smoke-stained torch song, as intense as it is comforting. And when you hear "Blue Velvet", you get a sense of where Salmon is coming from, and Lee Hazelwood’s "Sundown Sundown" signals where he’s going. "Hanging Out", another track from the brilliant "Sin Factory", spits with venomous intent - almost as much as the antagonist, barbed "Feel" (first released on the Surrealists’ debut album and re-recorded for Sin Factory). "Playground", already threatening in its "Sour Mash" guise, is just fucking nasty and evil.

"Don’t Expect Anything" and "Obvious is Obvious" weave between the dramatic and philosophical. Shit’s not always good, and that’s the reality.

In hindsight it’s tempBuy it ting to see the recording as signalling a shift in Salmon’s modus operandi. By the end of 1993 Salmon was no longer in the Beasts of Bourbon, and within a few years Salmon had recalibrated the Surrealists away from the darkest of its musical endeavours.

"Hookline and Singer" is a trip back to a near-perfect moment of musical performance. There must be something imperfect in this record, but damned if I can find it.