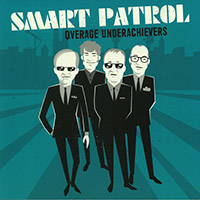 The Smart Patrol hails from Munich and play top-shelf mod power-pop. Recently pared back to a quartet with vocalist Jani Egloff taking maternity leave. The Smart Patrol's roots go back to the mod/'60s scenes in Hamburg and Munich of 25-plus years ago.

Names of bands like Swinging London, Merricks and Chocolate Factory pop up in the bio (me neither), and the principal members, Carsten Knapper (bass-vocals) and Harry Vogel (guitar-vocals), go back a long way.

History lesson over, back to the music. The Smart Patrol are a whole lotta fun. Catchy as a heavy cold in a London summer, they sound like the long-lost cousins of Melbourne’s Little Murders. If you didn't already know, that's a good thing. Reference points like The Plimsouls ring true, as well.

This is the sound of a band that revels in the music it plays. Brash opener "Suburb Sunday" sets things up. In your face and accessible, it jumps out of the speakers. As do many of the songs that follow.

"I Won't Go Back To Work" is a cover of a song by one-time Roky Erickson backing band The Explosives but The Smart Patrol make it their own. Honourable mentions also to originals like the stupendous "Far Away" and the horns-punctuated "Would You Like To Be a Popstar". And that's just the first side.

There are more hits than misses on "Overage Underachievers" but you won't hear a better one than Harry Vogel's "Tear This World In Tow" with its razor sharp chorus.

Not so much life changing as life affirming, "Overage Underachievers" is the sort of guitar pop southern summer soundtrack you could easily get on board with. Off The Hip in Melbourne is doing the CD, Screaming Apple the vinyl.