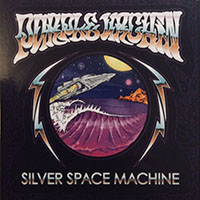 The band references Sabbath, The Stooges , Birdman and Hendrix but I’d put Sonic’s Rendezous Band higher on the list after just a few spins of their debut album, “Silver Space Machine”. Hawkwind might spring to mind from the title but it’s a bunch of downright earthy jams that are front-and-centre here, rather than trippy space rock.

If you can’t pick the Rendezvous vibe from the second cut, “Too California”, you’re just not listening. Spiffy’s channelling Sonic Smith - big time - on this one. More of the same on "Ho Hum & A Bottle of Rum" where an undercurrent of organ gives the song a distinctive '60s sound.

Stylistically speaking, "Lucky Thirteen" sits somewhere between Blue Cheer and Ron Asheton's New Order. "Electric Mistress" is pure '70s raunch with a thundering bottom-end with not an ounce of fat on the guitar (and an added tip of the hat to Brother Wayne.) Which is only right - back in the day, Hopkins was an original member of the SC5, Sydney's tribute to the MC5.

Macri and drummer Ben Alone make a no-nonsense engine room with the chops to handle the changes in a song like "Pilgrim Slave".

Righteous and rocking, got a copy via this Facebook link.