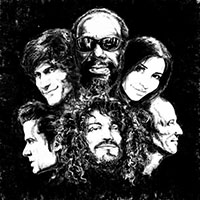 Detroit boy and founder of The Gories, Mick Collins, always did love to fuck with expectations in The Dirtbombs. Now, he's doing it again with some new playmates in Heavy Trash's Matt Verta-Ray, Matt's wife Rocio, and members of Swiss creole kings Mama Rosin.

"Subway Zydeco" sounds like it was cooked up in the kitchen of a cajun restaurant in the East Village, with a liberal sprinkling of blues. You can bet a New York minute against a free ride in a checker cab that this was exactly the intention. It's an LP of obscure 45s taken off a Louisiana jukebox and transplanted to a New York City dive bar.

If you came expecting a Blues Explosion - Jon Spencer co-founded Heavy Trash with Matt Verta-Ray - you're in the wrong place. "Subway Zydeco" is more folky than swampy, its pumping rhythms tied to accordion for most of the way.

Nothing is as it seems it might have been on "Subway Zydeco" - unless, of course, you've suspended sufficient reality to forget 90 percent of half the participants' antecedents. The Mama Rosin influence is all pervading and won't come as any surprise to their fans - they've been mining this vein for 10 years and making a substantial dent.

For mine, percussionist Xavier Bray from mama Rosin is the real star of the show, nailing down enough anti rock'n'roll rhythms and accents to give "Subway Zydeco" its novel feel.

On the other hand, Collins has never sounded like he does on the freewheeling "Zydeco Music", the breezy opening cut. It's the perfect set-up for the rest of the record.

"One Thing At a Time" is a laidback zydeco play on a slacker theme, a plucked steel string solo clearing the air. "Girl De Hong Kong" takes on an ethereal air with Collin's falsetto floating on ghostly guitar harmonics.

If the breakneck rhythm of "Ou Est-Tu?" doesn't get your blood pumping as you reach for the nearest map of Bourbon Street bars so you can go on a bender, you're a teatotaller or a Baptist. Maybe both.

"Bayou Lover" is the theme for a future New Orleans morning TV cartoon, with its greasy melodeon and slinky beat. And "Ballade" is in all French, for chrissakes. "Limplar" is where zydeco meets a bluebeat rhythm and Rocio Verta-Ray supplies the lead vocal, just to mix things up a bit. It's a little out of place but ultimately a lot of fun.