THE PLOW - Hieronymous Bogs (self released) 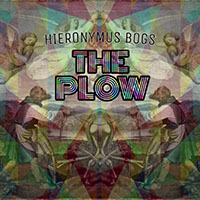 First time I laid my tired eyes on the impactful, dark, visually striking, elemental art work of Hieronymous Bogs, I knew he had come to some of the same conclusions about life and death as I had.

Like a candle flickering in the dark, his prophetic folkart, found object assemblages, and iconic religious alters are invested with a compassion and humility one seldom sees, nowadays. His multimedia sculptures and paintings are filled with visceral, primordial, intimate terror and sadness, gratitude and grace, and his music has that same kind of rawness and naked vulnerability, beat poet bravery, and Cohen like melancholy.

If you see him in his big hat, hitch-hiking on the side of the lonesome highway, with a crow on his shoulder and bluebirds nesting in his beard, pick him up, and he will humbly regale you with vividly spun, purplish tales of poignant observations and quiet awakenings.

A silvery, soft spoken cat who waxes enthusiastic about Whitman, Rumi, Ginsberg, and William Blake, Bogs is a Brooklyn-born bard who came to fame in the Rochester indie underground, before relocating to the deserted Southwest, he might remind you of a wild west stagecoach medicine show magician, or a wild eyed '60s guru in his patchwork coats of many colors and worn down shoes, he is part shaman, part healer, composer, painter, organizer, biblical prophet, poetry scholar, trickster, holy man, idealist, and outlaw philosopher in the tradition of Moon Dog or Lee Scratch Perry.

He says his gently courageous song, "Sister Death" is his version of Louis Armstrong's "Wonderful World". His inspired, quiet, experimental and minimalist poetry and music denies and defies easy description, or soundbite categorization. He collaborates with a producer named Sam Snider, but the sound is mostly the wise and weary testimony of a dropout mystic with his simple, soothingly hypnotic voice and  "Rosalie" reminds me of These Immortal Souls or the Bad Seeds, but I somehow doubt he's even heard that much Australian post-punk.

He plays a soothing, uplifting, noir gospel of his own making, an enchanted travelogue of decaying gas stations and greasy spoons, rusted cars abandoned on the side of the road and the sky his endless cathedral. His songs are brimming with the ghosts of old bluesmen, and broken dreams, druggy Americana, immense mountains and dark rolling clouds, haunting landscapes, sudden thundering monsoons, and biblical big sky grandiosity.

As soon as I first saw him, I knew he was a wizard of some kind, a sorcerer, a true believer, a world traveler, a medicine man, and joyful troubadour. His values and traditions are a welcome throwback to the indie maverick days of do it yourself house parties and pot luck, egalitarian communities and hobo soup. He is bringing back the bonfire, the songs, stories, and recognition and affirmation of our interconnectedness and the sacredness of family; rather than all that abusive, consumerist rat-racing and Gestapo head stomping, of the war machine's vile and bigoted corporate world violent mainstream sports programming. He writes songs to dead saints and venerates poverty, and his sensual moonlit songs evoke all the feelings society has taught you to stuff down with ambition and pills and iPods and accomplishments.

"Hildegard's Wisdom" is my early favorite on his new record. He is outstandingly good, very uniquely talented, there are soft glints of the Gun Club and Tom Waits, but he is a real original. He will be touring the East Coast and Midwest this summer. Contact his webpage for booking, he plays hootenannies and house parties, and to get your copy of his landmark LP, "THE PLOW". He is a genuine talent, a real artist, a seer, and a cosmic cowboy, his tunes are full of dramatic tension and soft synths and gothic guitars and a benevolent beauty that is a real heartening reprieve from the stopless juggernaut of USA war culture. Jimi Hendrix used to talk about the sky church, the electric church. Bogs could be the pastor there. Visit the bonfire here.