Opinion: You can be a successful band without airplay

By An Anonymous Australian Band Member

Recently I was interested to read an article on a News Corporation website in which Justin Burford, from a lame pop band called End of Fashion, took aim at AustralIa’s national youth broadcaster JJJ.

You can read it here. The issues he raised were mostly sound. What gets played is decided by a very small amount of people. Acts that do get played gain significant exposure which translates directly to commercial success. Let's put aside the fact that the decisions on who gains such a large advantage from a taxpayer funded resource are made by a select few people based on their own taste. It's a whole other kettle of fish and I may talk about that another time.

There was one part of the article that really grinded on me. Mr Burford believes that JJJ withdrawing their support for the band directly lead to their demise. How very sad. I can understand to a point. JJJ were very supportive of them from the very beginning, playing their debut EP on high rotation. Life must have been pretty sweet. From the beginning they had the stability of exposure through radio, and the security of the income that derives through APRA. It's doubtful they played to too many half empty rooms and they most likely used the exposure to gain many high profile gigs including international supports.

My band (who I won't name as this is not a plug for us), have spent many years doing things the hard way, without radio support, without any kind of support at all really. Yet we have released multiple albums, which have always at least broken even, and we have toured all around the country without losing money.

Here's my 7 simple rules for being in a real band, not a band that is just trying to be famous and gives up when it's not happening: 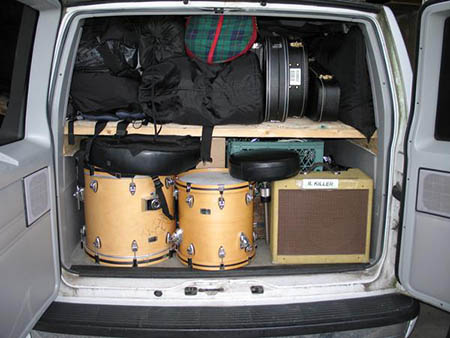 1) Get in the van and get out of the cities

Lots of bands seem to think the country begins and ends with the capital cities, and that cheap airfares mean that the only way to gig is to fly back and forth between them.

What utter bullshit, it's like they think anyone outside of the city is culturally retarded and just wanna hear covers and DJs.

Get in the van. Even with cheap airfares and the rising cost of petrol, it is still the most economical way to do things. Discover the country outside Sydney and Melbourne and play some gigs to 15 country people who'll always remember the fun they had the night you came through town. Don't look fucking disappointed that there's only 15 people there, fucking embrace it, and show you wanna be there and aren't just stopping in on the way somewhere else. These gigs usually pay pretty fucking well too. We have been all over the country and seen some great shit, met some top people, you don't know what you're missing doing it any other way.

If you're paying $2000 to advertise a gig through pole posters, street press ads etc, and the cover is $15, that means that advertising needs to be solely responsible for pulling in 134 payers all on it's own. That's ridiculous, get on social media, send out press releases to every place you can, put some posters up yourself..... you're in a band, what else have you got to be doing? Street press ads are a particular waste of money, no one goes to a gig because they saw it in the street press, it's not the 80s anymore.

Ah, the old cliche. The thing is if your main priority is being in a good band, and not a famous band, the only thing you have to worry about is not losing too much money doing it. We have gotten to the point where the band makes a small profit each financial year, nothing we could retire on, but's it's definitely not financially crippling. You've got all that time between gigs, go to work for Christ's sake. Besides if you're not living in the real world and don't have that perspective, the music you make is probably aloof and out of touch with everyday people anyway. Wanna sound like Silverchair? Well living a life where you've never had to work a shit job to make ends meet is probably a good place to start.

Again it's just simple maths. If you spend $30,000 recording an album with a recognised producer, and you're selling them for $20 a pop.... that's 1500 you gotta sell before you break even. That's not much if you're getting radio play, but if you aren't then it's gonna take a mammoth effort to get there. Don't make the mistake of thinking spending that money will get you the airplay, radio station bins are full of CDs bands have paid ridiculous amounts of money recording.

Besides modern technology means you can do so much shit on the cheap, call in some favours, record some stuff from home.

On top of it all, the number one point to be making is write and learn to play the songs BEFORE you record. I've never understood the point of getting into a studio and then writing and learning the songs. Write em, gig em and then a year down the track record them. You will get in to the studio and get everything down in less than 3 takes, anymore than that, you shouldn't be in there yet.

5) Sleep on some floors

Again are you looking to be in a rock band, or are you trying to be a rock star? Why waste money on hotels when you can meet new people and get some life experience doing things the tough way. Again, it will reflect in the music you write. There's nothing more annoying than big time bands singing about their first world problems. There's nothing more satisfying than shaking off a hangover after sleeping on someone's floor, and then backing it up to go again the next night.

Again, you have plenty of time on your hands and if you haven't got to the point where you're selling out venues on your own you don't need one. Especially don't get an enthusiastic fan to do it, it's nice that they like the band but you need to be at a point where things are getting too much to handle on your own. You need to get there yourself, getting a manager is not a way to get to that point.

This comes tough for some people who are predisposed to it. Don't be a dick to the sound guy, don't be a dick to the other bands on the bill. Hang around and watch the other bands as much as possible, share your gear if they need it, don't act like you're better than anyone else. If someone comes up to you and says they liked your band, don't blow them off, don't tell them you had an off night and you're usually sooo much better, that's weak, just have a chat and ask them about themselves. We may not have a reputation as being the greatest band going around, but anyone who has dealt with us knows us to be polite and friendly, and they are usually happy to help us out again again. Doesn't matter if your band is the best going around, if you act like a dickhead people will know it and rubbish you to anyone who will listen. Word gets around.