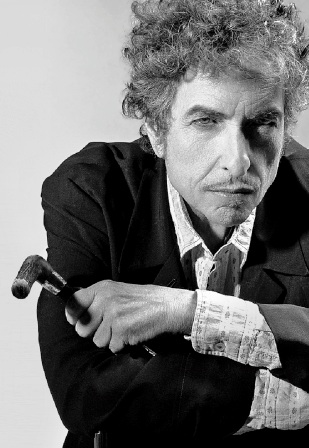 Dylan's modern period gets dismissed by those who want the greatest hits. Yet, the same criteria could be applied to his first five albums from his debut to "Highway 61 Revisted".

Dylan's choice in material is never is the issue, it's the burden of the many songs that mean so much to so many. It is not his issue what songs he chooses to play. It's the audience that's the problem.

The fact is Dylan is a tidal wave with more than 600 songs that have had a lasting impact on the music of the last 50 years. No record collection is worth its salt unless it has a copy of "Free Wheelin' Bob Dylan", "Blood on Tracks" or "Blonde on Blonde." I would now add "The Tempest" and Time Out of Mind."

That's the point: Dylan has remained as relevant and fresh in 2014 as he was in 1966. The main reason is that 75 percent of his live material is drawn from his recent albums – something that creative and performing artists should always do. The Stones, The Who, even The Stooges, are heritage acts.

I knew this tour was going to brilliant. I had the same gut feeling when he toured "Time Out of Mind" in 1998 with Patti Smith as his support. It was the album on which every layer was thought out. Every echo, every note and every word delivered was so intense and emotive. The new(ish) album, "The Tempest", was again layered with lyrics so gripping that they lay between Mark Twain and Charles Bukowski. Musically, its foundation was deeply embedded in 80 years of the history of American roots music.

The first of three Sydney shows for me is at the State Theatre and in many ways it is the perfect venue for His Bobness. The set is lit by eight powerful light cans; sparse with five microphones set up. (I was to find out later that they were only props.) The scene is channeling a post-war press conference, very Kubrick and very Dr Stangelove.

It's about 90 seconds past 8pm and on and the lights are fade, and the strum of the opening chords of "Times Have Changed" start, a moderate hit for Dylan and an Academy Award-winning song from 2000. In darkness, Dylan is in his latest styling, wearing the costume of a character from Deadwood. The aging saloon hustler, he spits out: "I am a worried man I have a worried mind/No one in front of me, no one in behind." Within 30 seconds, in a massive rush, the patrons clamor to their seats with drinks in hand.

From the outset, Dylan has one hand resting like Napoleon and is waving his hand right hand around in the shadows. He launches one of the three songs from the '60s, "She Belongs To Me" from "Bringing It All Back Home." The simple folkish, melodic ballad is reworked, slowed down and transformed, and layered with one the most solid bands in the world taking any stage. Tony Garner plucks the bass notes on his Jaguar while the acoustic guitar chimes and is overlaid with the pedal steel. The song is now delivered with the husk of Dylan's whisper. "Beyond Here Nothing" follows and then "Working Man's Blues" from "Modern Times".

Tony Garner is the coolest dude on any stage, the master musician and of style, and the band's leader. He grabs his double bass. "Duquesne Whistle" is the first track from "The Tempest"; the band is in full swing and Garner has his spider hands all over the double bass strings.

"Tangled Up In Blue" follows, a live standard, and probably the most played song from the 25 years and 3000 shows of the Never Ending Tour. Again, the pace is slowed from the original and the song is reworked with Dylan standing with his harmonica in hand, with which he delivers and stunning extended harp solo. Then Dylan shuffles over and sits on his baby grand and works in some blues scales on the piano as he delivers the final two verses.

Dylan constantly reinterprets his own material. It is true that certain artists like Hendrix and The Byrds actually opened his ears to the possibilities where he could take his music. Dylan then pushed the boundaries himself further. Since the '60s, Dylan has rarely tried to copy the recordings of what were his studio versions. So much so, that by 1978 he took it to the extreme of reggae versions of standards. His variations should not ever come as a surprise.

"Pay in Blood" from "The Tempest" shifts the mood to darkness with tales of vengeance and murder. Spontaneously, the audience stands and applauds. One voice hollers: "Bobby we love you!" Dylan returns the declaration by launching into "Love Sick" from "Time Out Of Mind". He then announces, the only time he speaks to us, "Thank you folks, I will return after a break," and the lights go up.

It was intermission; we had just witnessed nine songs and it clocked in at 55 minutes.

"High Water for Charley Patton" opens the second set. Dylan declares he is a "has been" amidst the lyrics, and the audience bellows: "No" in reply. The set starts exceptionally strongly. We return to another classic from "Blood on The Tracks", "Simple twist of fate" this one of best interpretations of this song I have heard live, on any bootleg. Dylan stunningly plays around the vocal original melody, and with intense phrasing. Then he launches into "Early Roman Kings", a powerful Chicago blues workout in the vein of Muddy Waters. Pounding and dark as Dylan spits the lyrics out, Charlie Sexton steps up with his Stratocaster squealing.

The highlights of the second set are all taken from "The Tempest": "Forgetful Heart" is startling, again Charlie Sexton over extending himself, now with a Les Paul strapped on. A beautiful extended solo, the sound so crisp that every note chimes and every bent note goes echoing across the theatre. "Scarlet Town" is another striking and emotive song, and is again played better than the album. The highlight again is Dylan's phrasing. The last song of the set is the "Long And Wasted Years", weaving with its stirring chord progression. Again, stunning.

As stated earlier, I actually adore "The Tempest" so I was not to be disappointed and live, the songs are superbly delivered. They second set is over. The audience is standing and rushing forward.

Dylan and the band returns to the stage for the encore. As with The Never Ending Tour, Bob has always pulls out the classics, "Like a Rolling Stone, "Forever Young" and "The Times Are a Changing". The band swings into a rocked-out "All Along The Watchtower." It's played as close as to the original as we expected but in reality is not the "John Wesley Harding" version, but closer to the 1974 rip-roaring Hendrix inspired workout, of the "Before The Flood" period. The fiddle soars and again Charlie steps in with an extended guitar workout and powerful interplay with Dylan's piano playing.

The eye contact between Sexton and Dylan is inspiring, working off each other, until Dylan waves his hand to draw it to a close. Seated at the baby grand, he then plays the opening chords (mellow and like a New Orleans blues) of "Blown in the Wind". It is slowed down and with long drawn out instrumentation, as he gravels his way through, and skating over the original melody. After they finish and to a standing ovation, the band cluster together, and give a bow: while Dylan acknowledges the audience. It's over.

The following night I returned and again it reach it the same majestic heights. I felt his vocals were not quite as strong as the opening night. I had to then wait four days to the Opera House show. It was a repeat of the same set. The change was Dylan's vocals and this was the strongest performance. He was animated, performing jigs, and waving his hands around. His Bobness was pleased with himself: momentary looking around the concert hall, standing staring the nose bleed section and then turning with a grin to his band. Seemingly pleased to be here.

I am unsure if Bob will return; he is 73, and as seems to tour Australia every three or four years. He is now frail. The story on why he does not play guitar is that he has chronic arthritis and the weight of guitar over extended periods is too painful. What was remarkable was that he cares so much; as if the memory of a Dylan show would be edge into his fans memory as a special and startling night: a reward.

If you weren't there, I can't say much more, well maybe you are not a fan. That's it. If you were, it was maybe, a simple curiously to witness a music icon, you are a student of rock music, or the history American music rolled into two hours, or an outright Dylan fanatic. Like me you too witnessed something that will not be repeated: a once in a lifetime gig.