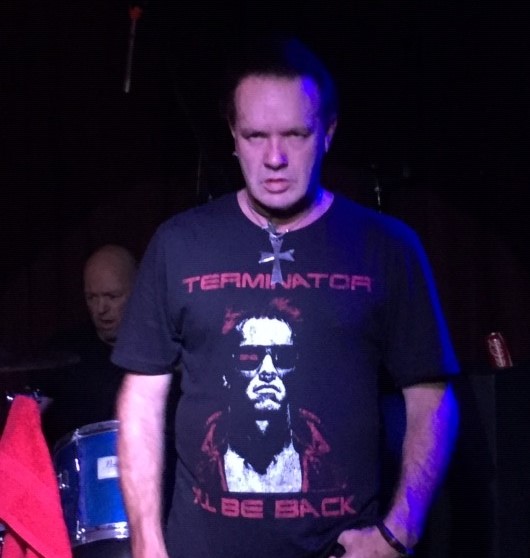 Tony “Grudge” Hayward, my friend with the impish smirk, that strong, capable, street-smart man who saw through the city snobs and inspired friendship in all around him because he was simply a force of nature, has died. He was taken to palliative care on May 11 and passed six days later.

Tony was a member of C-Bombs, Roadkill66 and REPO. Six months ago I would've said Tony was damn near indestructible, but once more, Adelaide's scene is in a state of shock and grief.

You need to know that I am probably the least of Tony's friends to write this, and I apologise for that. I came so late to Tony's life, and it was a damned big life. There are many bandmates, friends and relatives with much, much more to tell - and in time perhaps they will.

Tony died in a South Australian country hospital; he went in knowing the end was imminent, and he faced it in characteristic style, with an apparent offhand acceptance. Was he brave for the love of his life? Partly, I am sure; but even had she not been there, Tony had faced a lot of things, dealt with them all because he was, as I say, a capable man as well as being tough, brave.

There's a story out there at the moment that Deniz Tek re-set Tony's arm after he broke it. Well, that's not quite the way Tony told me the story... first, in 1998 Tony had a motorbike. He was riding in the country one day when he got clipped by a car or truck or some damn thing. He went flying through the air, flipped a few times. Lay there, surprised to find himself alive, got his breath back, got up and walked over to the bloke who'd clipped him, who was standing there with his mouth open ...

The bloke told Tony what had happened, and Tony looked at his arm... it had popped out of its socket and wound round twice. The people in the hospital were quite amazed. But the arm was eventually popped back in its socket.

Anyway, Radio Birdman were playing Adelaide (at Fowlers, apparently) and Tony was in the support act, Roadkill 66. “We blew Birdman offstage,” he told me. I won't disbelieve that, the Roadkill 66 CDs are mighty fine. And Tony was a brilliant frontman. During the gig, his arm popped out of the shoulder socket again. Tony simply continued the gig. Afterwards, wondering quite what to do, and having had a few, he was sitting backstage when Deniz Tek was heading past. Tony said, “excuse me, could you help me?”, which got Tony nowhere. Tony then came out with, “Call yourself a doctor? I've bust my arm and I need help.”. Tek turned around, established what the problem was and popped Tony's arm back in.

You'd never have known Tony had any physical problems unless he told you. And he didn't tell many people. Because despite the wild party animal he sometimes was, he was also a private person. Even so, if you think the Tek story is a beauty, you should've heard the one where he about encountered KISS, or when he told Paris Hilton to piss off.

I came late into Tony's life, and I won't pretend to have seen all the bands he was in. But if I could revisit myself in the 1990s, I'd be heading out to see Skagnetti, Roadkill 66, REPO and (perhaps the most famous) Grudge. Tony once told me he thought Grudge made more money from their t-shirts ... which, because they made no reference to a band, but a strong attitude or state of mind, the shirts were a 1990s meme before memes got popular. Instead, I 'only' saw the C-Bombs. Tony was the ideal front man. The band were damn tight; with Rob Szkolik on bass, Phil Grudge on drums and Sean Tilmouth on guitar. These men, with big personalities, were perfect for Tony, and Tony, this quietly confident chap could turn on a stage presence in a heartbeat and capture the room. Tony was perfect for them.

After seeing them at the Land of Promise Hotel, I went up and congratulated Tony - he was a rock star transplanted to a strange place. A few days later I saw him in my local supermarket. We talked. He lived just down the road. We became friends. Also, he was doing gardening and handyman work and - as you may already guess - I am several shades of useless at 'man about the house' tasks, so I asked if he could help with the garden and so on. He took me by surprise when he suggested 'mates rates' (ie, giving me a discount), and I think I surprised him by refusing.

We saw the C-Bombs whenever we could. I realised that I'd known Rob Szkolik way back in 1982 or something.

Slowly, however, Tony was changing his life. Opening up a collectables shop - Retro Bait - 2 hours' drive from the city. He worked damned hard doing it, driving all over the place to gather stock. And the band needed Tony. Didn't want another singer. So Tony would drive from the country to the city, arrive at the gig with 20 minutes to spare, get on, perform brilliantly, and be gone shortly after, facing another 2 hour drive. Eventually The C-Bombs split.

Shortly afterwards, Rob Szkolik became seriously ill; he died on the 5th of January this year. By then Tony was facing his own battle.

Andy MacQueen's death, Rob Szkolik's death, and Tony Hayward's death all leave the kind of hole in our lives which make us question why some are taken from us, and why the bloody hell it's us useless lot who are left behind.

When I visited a few weeks ago, Tony was getting around on a walking frame, told me he was determined to walk further every day, that he'd be driving soon. No, not denial. We talked frankly about the imminence of his death, how things would be sorted out, and his achievements, which weren't small. After all, how many of us figure out what we really want to do, and get to do it? How many of us find someone who loves us? These things ain't as common as you think.

This was his final message to me five days before he went into hospital; "You’re on for pizza. Gotta go. Phone nearly dead."

If you're as unlucky as me, and never saw Tony Grudge's early bands, you can get some Roadkill 66 here:

You can see Grudge in Adelaide scene context here: http://www.artsendup.yolasite.com

I may be about to get horribly drunk.