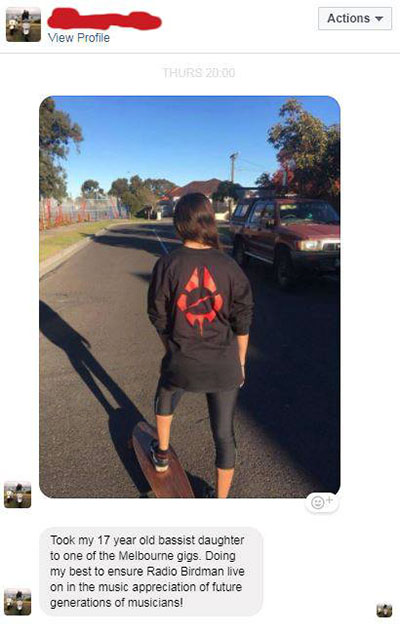 Challenged myself to do a Radio Birdman top ten of 2018. Wasn't too difficult.

Pretty cool to see that so much good stuff is still happening from people who started more than 40 years ago - half of these would make the grade on anybody's list.

Jim Dickson - Coelum Versus
I think this might have come out last year, but I only listened to it this year so it's on the list. Great eclectic album from New Christs and Radio Birdman bassplayer! Music video for one of the tracks coming next year, well overdue (sorry Jim!)

Vinyl EP featuring re-workings of Stooges tracks. Killer songs, killer versions that veer enough away from the originals. Love the production and the feel.

Chris Masuak & Harbour City Waveriders - Factory Floor, Sydney
Awesome setlist of so many classic tracks but I actually dig the songs from the "Brujita" album the most (go buy it, full of catchy pop hooks).
Fantastic pulled together band with Australia's most underrated guitarist and songwriter!

Flaming Hands and On & Ons - Factory Floor, Sydney
I was excited to see Warwick Gilbert back on bass but was blown away by Julienne Mostyn Gilbert on vocals. An amazing presence and great performer! A better show for Flaming Hands than their Sunnyboys support at The Enmore.

Loved the new songs, so I'm glad to hear they are back in the recording studio. On & Ons were great, too!

Radio Birdman/Died Pretty at Croxton (Melbourne)
The difference between the Sydney (Enmore Theatre) and Melbourne shows was chalk and cheese. Not just blokes being blokey, women under 30 were dancing (not moshing, dancing) in the rock'n'roll city of Melbourne. Lift your game Sydney!

No matter what you think about the current lineup, there was a hell of a lot of energy coming off that stage. Died Pretty were great, but I was in a Birdman mood, coming off the back of the film.

Descent into the Maelstrom - Funhouse Jukebox Soundtrack
Thanks to John Needham (Radio Birdman manager/Citadel Records founder) who suggested this instead of a Birdman greatest hits soundtrack.
First ever release of The Rats demos, remastered and jumping out the speakers. Rob Younger has mixed feelings about The Rats being released so there's no guarantee you'll never hear it again!

I put this on in the car and it's a surprisingly great mixtape. Perfect Christmas pressie for your nieces and nephews who need to hear some "real" music. And on vinyl too! Buy it here.

Mark Taylor - Shining Star
This is especially on the list because it's not an official release, just someone at home, making music, in this case Funhouse alumnus (Psycho Surgeons/Lipstick Killers) Mark Taylor. Two minutes of killer track and one of the best songs of the year. Sounds familiar and new at the same time. Hear it here.

"Descent into the Maelstrom - The Radio Birdman Story"
Yeah I made this film, so maybe that makes me a wanker for putting it in my Top Ten. But I've watched this about a hundred times and I still laugh at the funny bits, and squirm at the sad bits, so I know it's good!

This is not self-indulgent fan film nostalgia. As much as the movie itself, the satisfaction has been from the audience who "get" it, who know that doing what you are passionate about, and doing it as well as you possibly can, is worth it. If you've got that attitude, you might just be in someone else's Top Ten list in 40 years time.

"Descent..." is rolling out in overseas film festivals in 2018 and will be hitting DVD/Blu Ray and Australian TV in the second half of next year.