Written by Derrick Ogrodny on 28 December 2018. 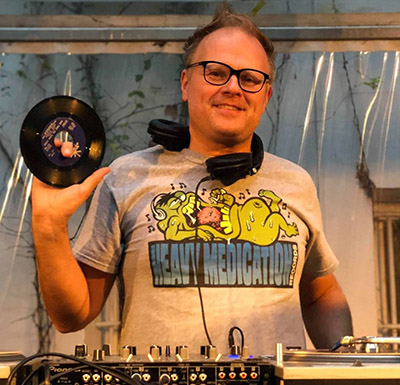 2) Cosmic Psychos
I watched the "Blokes You Can Trust" doc earlier this year, so the announcement of a new Cosmic Psychos album got my nipples hard. "Loudmouth Soup" (Go the Hack/Subway Records) surely didn't disappoint. The Psychos are an Aussie institution, and as such, you know what kind of pummelling you're going to get when the needle hits the groove.

But there are some pleasant surprises tossed into this Soup as well. "Feeling Average" is as close to a radio-friendly pop song as this band's gonna get and as catchy as an STD. "Rat on the Mat" sneaks some 'ooh la las' into the chorus while ragging on seafood on pizza. (BTW, what the hell's a dune rat?) On "Better in the Shed", Mad Macca lays down a killer guitar riff while Ross sings about how it doesn't make any fucking sense. The CP's have always managed to make what they do seem effortless, but there's an underlying wit and invention here that keeps it all from coming off as contrived or ham-fisted. "Loudmouth Soup" is sweaty, dirty and fun, and I'm seriously looking forward to their show in Berlin in April 2019.

3) Jonesy - Jonesy (Dead Beat Records)
One tune on Jonesy's self-titled album (Dead Beat Records) opens with the lyric "My favorite song's 'All Kindsa Girls'", while another one declares, "I'd rather be alone listening to the Ramones". That pretty much sums up where this foursome is coming from. Not to be confused with the 70's UK proggers with the same name, this Jonesy hails from Montreal and plays filthy, catchy-as-hell bubblegum punk about tit fucks, superficial mall girls, and the redeeming power of rock and roll. This album took me back to my awkward teenage years, when listening to my record collection offered solace from the square outside world. It's a feel-good punk record, and frankly, we need more records like it.

4) Heart of Black City - Poison Heart (Heavy Medication)
Putting your own label's releases in a Top 10 is akin to self-fellatio, but bear with me and you'll understand why I had to include this record on my list.

Most DIY labels begin by releasing a friend's record (if not one's own), and Poison Heart's "Heart of Black City" (Heavy Medication) was a damn fine friends' platter with which to kickstart a label. Warsaw's PH aren't called the "Polish Hellacopters" for nothing (check out HOBC's closing track "Bagarmossen"), but it would be a disservice to simply write them off as Scandi-styled rockers. There's hints of ’70s protopunk creeping into their sound (think Sonic's Rendezvous), made all the more noticeable by their decision to cut back on the gain in the mix for a more ‘70s hard-rock guitar sound.

This, their fourth record in eight years, shows a more mature side to these punk'n'rollers, both in the lyrics which have an older-but-wiser depth, as well as in the confident playing and the melodies in their tunes. And while Jacek Barton can belt out an ear-piercing shriek when needed, he really sings on this record!

But for me, there's more to this record than the sum of its musical parts. While behind the Iron Curtain, Poland was cut off ideologically as well as musically from the West, One thing I noticed when I moved here from the U.S. in the mid-90's was that there were huge gaps in the Polish collective mind when it came to non-mainstream music. Punk rock had made its mark here as in most other countries, but it was UK bands that had a greater impact on the indigenous scene as a whole: Pistols, Clash, UK Subs, GBH, Exploited, Motorhead, Iron Maiden…

These bands were more accessible geographically, and thus their records could be acquired more easily via the black market or record-and tape-trading circles. It was far more difficult to come across records by the MC5, Dead Boys, Devo, The Dictators, Suicide, X or the New York Dolls, so naturally their influence was absent from the sonic landscape. I remember once talking to a Polish Iggy Pop fan that'd never heard of The Stooges. Sad but true.

Fast-forward 20 years: Poland's in the EU, more indie records and bands come through the country, and a new generation of young'uns weaned on YouTube and music streaming services are starting bands. They've been exposed to far more music than the previous generations were, and you can hear it in the noise they make.

Then you have Poison Heart and their Gluecifer/'Copters-styled rock action, adding a few more new building blocks to the musical pyramid. There's a small revolution brewing in the Polish indie scene, a harbinger of exciting times ahead for Polish fans of loud guitar-based rock, as it moves away from the dominance of hardcore and metal into garagier, more psychedelic sounds.

And that is why PH's "Heart of Black City" is important to me and warrants a slot in my Top 7 of 2018 (besides the fact that it fucking rocks), and why I get so excited whenever it reaps positive reviews from people outside of Poland. Hopefully, this album will be a prominent step in putting Poland on the global rock & roll map, as well as a call-to-arms for more young Poles to pick up guitars and kick out the jams.

This is one loud, dirty-sounding firebomb of a seven-inch that slaps you upside the head straight outta the gate with "Vibrator Violator", a song about a dickless Vietnam vet who gets revenge on the world by penetrating unsuspecting orifices with the titular instrument. Before you have time to catch your breath, you're sucker-punched by "The Devil Sucks My Cock and Swallows", with singer Philo Phuckface screaming "I'm a red-white Lucifer!" (Red and white are the national colors, in case ya didn't know.) And that's just Side One! G.G. Allin must have spawned some illegitimate children in Poland. Keep an eye out for their first full-length release next year.

6) Best Discovery of 2018 #1 – Bella Wreck s/t LP (Mirabella Wreckords)
We've all been there. You get to a show too early and have to sit through two opening bands you don't know before the band you like hits the stage. Then unexpectedly, the completely unknown first band, which is playing to about ten people in the venue (including the soundguy), proceeds to play an ass-whupping set that has you dancing around like a giddy kid at Christmas. All your friends arrive to the show later, and all you can do is rant on about how amazing the first band was, as they stare back blankly while sipping their beers, as if you'd just told them you'd spotted Bigfoot. As the Hydromatics once sang, there's no justice in rock & roll.

This is how I first encountered Berlin's Bella Wreck, and their energy and songs absolutely floored me. The fact that they played to a tiny, mostly indifferent audience didn't faze me one bit; I was hooked! Sydney-to-Berlin transplant Dave Thomas (formerly of Cultish hard-rockers Doomfoxx) and his German comrades combine Birdman riffs with power-pop hooks and action-rock dynamics. Naturally after the gig, I bought their album at the merch table to see if I could recreate that experience at home. I'm happy to say that again Bella Wreck again exceeded my expectations.

Bella Wreck's sole vinyl-only album is from 2013, where it must have remained because it didn't seem to get much exposure. A quick Google search reveals only a few German-language reviews and a handful of tracks to listen to online, which is a tremendous shame considering the caliber of material found on the album. Listening to Bella Wreck's debut is like finding a stack of killer lost Australian garage-punk 45's from the 80's. A lot of these tracks would have blended in perfectly on the "Do the Pop" compilation. This record spent more time on my turntable than any other this year. In fact, I liked it so much that I'm giving it a proper re-release in early 2019, because music this good needs to be shared. Be forewarned!

7) Best Discovery of 2018 #2 -- Chris D. "Love Cannot Die" CD (Sympathy for the Record Industry)
I'm a vinyl guy, but releases like this are the reason I'll never be able to resign from buying CD's from time to time.
Chris D. of The Flesh Eaters and Divine Horsemen needs no introduction here, but this obscure pearl certainly does. Chris' solo record, released on CD only to little or no fanfare in 1995 by Sympathy for the Record Industry, must have gotten sucked into a black hole for there not to be a single review of it online anywhere. It's almost as if we're not supposed to know it exists. The disc as a whole is a kindred spirit to the "Time Stands Still" album (my personal favorite Chris D. record), though the vibe here is more intimate, even achingly tender at times. I've always loved Chris D.'s lyrics, and here they really shine as the simple but evocative arrangements allow his words to take center stage.

Those anticipating the snarling rock of the Flesh Eaters or the jagged, sun-baked darkness of "Time Stands Still" should look elsewhere in Desjardins' discography. The mood throughout is introspective, occasionally heart-wrenching (the nine-minute "Love Cannot Die"), but never boring despite the disc clocking in at a little over an hour. Standout tracks include the aforementioned title track, the countrified "Poison Fang Society", and the CCR-ish "Love's Suicides" and "In Eclipse". This is a record that hypnotized me with its sublime magic and had me coming back to drink from its waters over and over again. A bona fide 'hidden gem'! Track down the disc or give it a spin on Spotify during your next soul-searching session.

So there you have it, my very subjective summary of 2018. I didn't even mention some of the great gigs Warsaw was blessed with, but I'll save those for another time. At the very least, I hope some of you will now see Poland as something more than vodka, pierogis and a former pope. Drop by for a visit, bring your  guitars, and remember: "Heavy Medication gonna make you feel alright!"