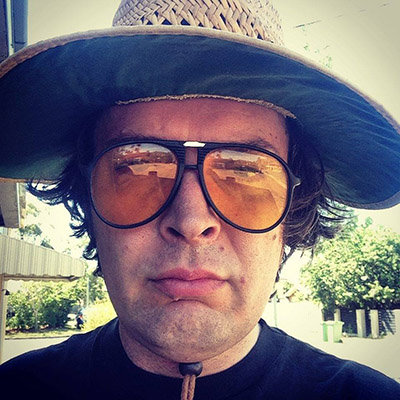 Like so many, I hopped on the Kuepper Express in 1991 with "Honey Steel’s Gold" as a young man and have never looked back. No other artist in Australia has managed to be this prolific and interesting  both at the same time.

I thought I’d give you a glimpse of Brisbane’s underground music scene with 10 of the most interesting bands I saw. Honourable mentions go to Gravel Samwidge, FFEHRO, The Wonderfuls, Gerald Keeney  and the Gerald Keeneys  and Sorry Golden State.

Pious Faults
They play a fast and unapologetic punk music, with the average age of the band a little higher than that of Eater but with the same sense of immediacy.

Louis Burdett
Burdett somehow manages to find a new audience who soon learn that he is in fact one of the most formidable free-form improvisers  Australia has ever seen while his peers in the jazz world continue to throw shade on him.

Soot
Their sound is as fragile as their ability to sing and play their instruments. As students of Brisbane’s musical past(s), a nod to the Pits is most definitely apparent. All that’s said is of course purely complimentary.

Angela Dowling
She is like a female Pip Proud – playing some of the most sincere music with a gently –strummed guitar and a lonely soft voice which at times can be out of time and out of mind. Angela Dowling has no understanding that her music is that of an outsider and that’s what makes her absolutely complete as an artist.

Goon Sax
The ever-evolving trio to whom old people feel is the next generation Go-Betweens but we all know very well that it’s actually not like that at all. THEY SOUND NOTHING LIKE THE GO-BETWEENS!

Greg Charles & the Ex-Catholics
Their drummer Michael Donnelly can hold a Waiting for the Man snare pattern for infinity and the rest of the band can similarly sit on one chord while Greg sings lyrics actually worth listening to.

C.D.I.Q.
Come Die In Queensland remind us of what New York sounded like in 1979, Melbourne in 1980 and what Brisbane today sounds like: a mess of rhythms that resemble the coughs of a summer flu and a disregard for convention. The post-Ric’s Brisbane hasn’t sounded this colourful.

Eggvein
Music as approached by visual artists who certainly are not strangers to minimalism, repetition and of course the principles of art-rock.  It’s at times loud. It’s at times aurally disturbing. All the time is never like the last time.

Kitchen’s Floor
Having seen it all come and go in the river city, Matt Kennedy pushes the hatred through the blockades with what could perhaps be the strongest line-up of Kitchen’s Floor complete with the hubcap-as-cymbal flourishes.

Mutanteer Premium
Once the echo is on singer Sleepy’s voice, they begin to venture towards a territory of hallucinatory abandon that only the mighty and slightly exclusive Les Rallizes Dénudés would be aware of; not that they would tell you.