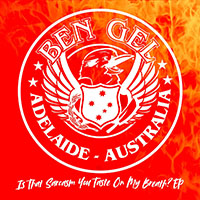 In the first place, as soon as you play this EP, you'll not want to take it off. There's an interview with the great man here, so you'll want to take the six-track EP ("Anarchy in 2020") and burn this to CD with it. Another cracking album, and one which is damn hard to write about when the thing's playing. Cannot concentrate. Must dance.

To judge on the familiarity of titles alone is to completely miss the point. Every track has a well-worked-out rhythm structure, often with stop-start stop-starts just to keep you guessing, with short, acrid lead breaks which often soar upwards only to dart back down and around. "Bleed It", for example, belongs on every classic punk compilation, old or new.

Hell, these are songs you will want to sing along to. And check out the rhythm section break on "Always the Same".

Somewhere between Thin Lizzy and commercial pop circa 1979, 'Tricks on Hindley" - for a long time Hindley Street was what passed for Adelaide's Reeperbahn (minus the posing couches), and it was not uncommon to discover the girl you fancied was doing a little moonlighting for smack. And yes, I know it's a same-shit-different-day tale which innumerable Eastern states inhabitants could tell, but it's still a sad and ugly thing. But people make decisions, perhaps thinking the damage will either be temporary or not really happen to them. I won't quote from the lyrics 'cos I'll list the lot.

If there's a flaw - there isn't one but I'm a reviewer and I'm supposed to say there is, just for the look of things - it's that there's no lyric sheet. Meanwhile, get yer bopping and thrashing shoes on. Ben Gel is seriously under-rated, and what the hell he's doing here I have no idea. When the pandemic is finally absorbed, Ben Gel should take his band to your town and make you weep, dance and wrench your old ligger back.

Get the downloads here.

You're gonna get drunk while you play this LOUD and lurch around the room mumbling nonsense.

Tags: ben gel and the boneyard saints, ben gel, Is That Sarcasm You Taste On My Breath?