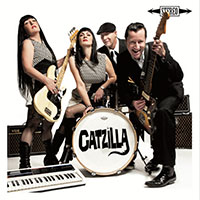 "Strut Miss Lizzy" is a romping, stomping, raunchy tune. "Kitty Kitty" is pure gold. "Secret Agent 99" is filled with humour and wit. "Keep On Dancing" does just that.

"Stomping In The Jungle" is one hell of a fine tune , but for me, "Everywhere You Go" is the perfect pop song. The vocal of Coo Jarvis is just beautiful (think Lisa Kekaula from The Bellrays. This lady can sing, folks, and I mean sing.

Formed from the ashes of Rocket To Memphis after their drummer left and moved to Melbourne, Catzilla had the honour of playing the legendary "Back From The Grave" garage rock show in Tokyo last year. Coo and Andy are formerly of Sydney band Toys Went Berzerk.

So, abusers of the I-94 Bar, as the band says, this album should be played at your next go-go party.

I expect to hear a lot more of this wonderful band from Western Australia. Six West End Beers please Barman!