Chow down on some 12-bar bile

Written by Robert Brokenmouth & The Barman on 14 February 2021. 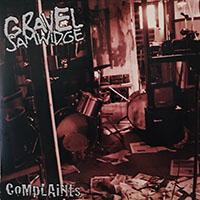 It's quite unpleasant, and I may never listen to it again.

But if I do, it will be very loud, and I will end up in jail.

I like Gravel Samwidge. They're out of kilter with everything else around right now. The songs put the listener right in the singer's place, their intense, irritated narrative. The Gravels write songs as natural to Australia as the King Brown Snake, and just about as cuddly.

The Barman's right when he makes the comparison to Kim Salmon and the Surrealists (see "Don't You Know", with the silly/ griping sax, or "Briz 31", with the topply structure), but The Gravels have their own - possibly stranger - take on the universe and our misplacement in it. 'Long Distance Drive' captures that horrible last part of a long drive, when you're almost home, spaced out from too much driving and methadone, frantic to get there (Spinks' manic guitar sounds like a whizz-head on violin) yet forcing yourself to stay calm.

The stop-start grandiose 'Holding' references The Birthday Party without sounding much like them - except for one thing: both The Gravels and The Birthday Party could be bloody annoying in their music; the tempo, the bonkers guitars. Hell, you could make a case for The Gravels being fans of The Fall, too (they sound nothing like either). There's actually quite a few nods to other bands - or maybe they're starting points, I dunno - and that's not really worth mentioning unless you're obsessed with finding Wally. "Circus Sideshow" is a wonderful example of a song falling in on itself with great precision ... and then scrabbles out again.

I think what really interests me about this outfit is that they speak to me of our frustrating internal world, without once trying to make a song to make you dance or jig along and spill your beer while bellowing the catchphrase in the ear of the unfortunate in front of you.

Get "Complaints" if you're a grumpy old git like me who wants the world to pay a bit more attention to itself, and you fancy a turn inside yourself. Down a wrong way street, naturally. - Robert Brokenmouth

Remember in the 1990s when rock and roll was still vaguely dangerous and one of the eternal sources of fascination was seeing which underground act would be the next for the evil major labels to sink their fangs into and attempt to “cross them over” into the mainstream?

It was a grim game of Russian Roulette where you knew that whichever band succumbed was at short odds to either end up on a scrapheap with the creative life sucked out of its bones, or limp on as a cashed-up and pale shadow of its former self.

Remember when a bemused Kim Salmon and the Surrealists ended up on the undercard of an Australian tour by the execrable U2 - about the time of the former’s self-titled record that attracted a review calling them “ugly music for ugly people”? The Surrealists survived their dance with the devil by declaring themselves gods and adopting the resilience of the cockroach. There’s a lot of them in Brisbane’s Gravel Samwidge and (thankfully) no major label is going to come knocking at their door soon….

Part of the reason is that Gravel Samwidge is a “veteran” band – which means they’re past their mid-20s. Principal member, Mark Spinks, formed the first line-up in Sydney in 1989 and spending some time in Melbourne before heading north so mainstream radio would classify them as Prehistoric. Noise Rock is a lazy tag but it conveys a sense of what Gravel Samwidge’s music is about. It’s built around the vocals and guitar of Spinks and a solid engine room of Ash Jenkins on bass and Alex Morrison on drums, and this is long-player number-four.

The Samwidge’s fillings are supplemented by occasional extra guitar and some artfully unhinged sax, and the songs reflect on the seamy side of life far too much for their and your mutual good. Strong songs that stop short of jam-my - a good thing as there are 14 of them – with nods to Salmon and Lubricated Goat. I wasn’t a big fan of the Evil Star back bar scene in Sydney back in the day but that’s where this music fitted. Or at a Thug show at Peterhsham Inn with its pants round its ankles.

“Complaints” is an album that will draw a few from the neighbours if turned up to the appropriate volume. It’s as raw as sushi and smelly like the restaurant off-cuts that were left too long in the kitchen’s back alley bin. The sound is often atonal, a little toxic, and always confrontational. Think of it as 12-bar bile.

The funereal “Briz 31” recalls the Surrealists in their most maudlin, downer-flavoured glory and is a riff on urban decay. The band namedrops Flipper and I can’t hear the lurching feel that underscores their stuff but a mutual love of sludge certainly rises to the top.

Favourite cut “Long Distance Drive” is a confessional trip to somewhere fuelled by years on the dole and the ‘done. It surges along like a V8 Falcon with a hole in the muffler and Spinks’ vocal gets right inside the song . “Waste My Weekend” contains enough lyrical cynicism to propel several lifetimes of indifference and a guitar denouement that resembles a car crash.

“Tell Mum” marries a caustic riff to a homicidal undertone that makes you wonder about the quality of parenting north of the Tweed River these days.

It’s on LP and CD and is being launched at a gig in Brisbane at The Bearded Lady on Saturday. March 6. Remember gigs? Get down in the gutter. Mind the broken glass.

Buy it on Bandcamp

Buy it from the label