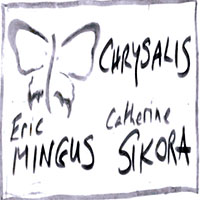 Why they play horrible current “pop” in these places I have no idea, as it makes me hurry to get what I need and run; I mean, if I could get my groceries in a place with either nothing playing or bland light classical wittering away in the background I'd be very happy ... oh, then there's the likes of Albert Ayler... don't get me started.

See, the thing about “modern” jazz is, many of us can pass it by as just “sound’” or “sounds”. That's the truth. The reality is that modern jazz can be either daunting (or “put-downable”) or hypnotically entrancing. Here's some context: Catherine Sikora featured as soloist in Eric Mingus’ “Tommy’”at the Adelaide Festival in 2015.

Okay, so there's an interview with Eric Mingus you need to read in tandem with this. And here's a quote from Catherine, explaining an experience which contributed to her becoming a musician:

“One day when I was a kid I was walking in the countryside near where I grew up, in the Southwest of Ireland. There was a metal tubular gate, the usual type for this area, and it was singing in the wind. The air was creating tones and overtones where there were holes in the tubing of the gate. The sound was eerie and I was electrified. At the time I don’t think I realized it, but that keeps on coming back to me as a moment where I started to understand that music can be much more than anything I had experienced before."

Not just a creaky gate, but a gateway experience. Magnificent. For me, that's like a neon light saying “You gotta hear what this woman's up to!” and I reach out and start gathering ...

And here's a thumbnail portrait: "Saxophonist, improviser and composer Catherine Sikora started her musical journey in West Cork, Ireland, where she was born and raised. Self taught to begin with, she moved to New York City in 2000 to study and play with great improvisers. Sikora works in a broad range of settings, from highly complex composed music, to folk songs, to free improvisation. She works regularly with Eric Mingus, Enrique Haneine, Brian Chase, Han-earl Park, Stanley Zappa, Christopher Culpo and Ross Hammond, as well as actively pursuing solo performance."

I-94 Bar: You made a comment about a musician's skill level being “perishable” ... also, I gather you're rather busy at the moment..?

Catherine Sikora: I am currently in New York, working with David Shire on the music for a play his wife Didi Conn has written, and quite blissfully up to my eyeballs in new music and challenges, and trying to prepare for some shows of my own in the next couple weeks. I have a duo with Brian Chase (of the Yeah Yeah Yeahs) and Matteo Liberatore, and a solo gig too, so lots of practice must be done. The comment about the skill being perishable was 100 percent true! Saxophone is a beast to keep on top of.

“Chrysalis” gets you both ways at once, quiet and loud, with an almost infinite degree of movement. So much going on here; “Chrysalis” is what I call 'a cardy snagger': no matter what you do while this is on, you'll catch yourself on something all the time. You'll definitely need to put “Chrysalis” on when you can listen to it properly, otherwise, if you're (say) preparing food you'll end up stuffing caesar salad into the chicken instead. That said, you're in for a treat, as there are several couple of themes written into the overall concept of insectile transformation.

So, listened to straight, it's straightforward. Insect life, the struggle to live and procreate, and transform into something more spectacular. There's so much hovering beauty as Eric and Catherine both mimic the buzzing of insects, their flight and quizzical nature.

And “Chrysalis” has so much space, so much reflection, and with such well-recorded tones, that it's really quite a trip (if you're old enough to remember what that means). Their musical description of the entire odd, if not downright bizarre, process by which one creature becomes something very different (I mean, from a caterpillar to a winged jewel, come on!).

However, a clue to what might also be going on here may be found in the last song, “Nabokov's Net and Needle”, which I reckon may clarify the origin of “Chrysalis” and indicate a deeper series of themes.

Vladimir Nabokov, author (most famously) of 'Lolita' (1955) was also an entomologist.

You know. He studied bugs.

For fun. Lepidoptera. Butterflies. And, apparently he was quite an expert and he developed the idea of Lolita while he was travelling, hunting butterflies.

I'm guessing that it was the 2016 book “Fine Lines: Vladimir Nabokov's Scientific Art’”(edited edited by Stephen Blackwell and Kurt Johnson) - or an article about it in "The New Yorker” was where this particular concept came from. :

So, if we take that as the starting point - that of the butterfly/chrysalis thing, but with the added frisson that the author of (what I suspect he thought of a comic novel) “Lolita” (and yes, I'm sure Nabokov would be horrified at the way in which that term is used today), a story of the seducer seduced (oh, sorry, spoiler alert, delete delete) then we're listening to “Chrysalis” through a very odd lens indeed, where we think about how women are or become transformed, and also about the pursuers, and the pursuit of women, and how it alters those women. Then, of course, there's the flipside, that of how the transformation affects the predators ...

For example, the first track, “The Work of Spring” ushers us to our seat with a deceptively insistent acoustic guitar, then Eric's simply huge voice comes in, even when he's whispering he gets your attention, and then Catherine's rich, textural sax. “This can be a dangerous game ... don't catch a predator's eye”.

Again, I could be reading way too much into this; so I asked for clarification.

I94-Bar: I'm wondering about the link between Nabokov's lepidopteral obsession and 'that' novel of his; and how it ties in with the LP. I don't want to come out with something which is totally wrong, obviously...

Catherine Sikora: As regards Nabokov and that novel, I can only speak for myself, but it really didn't factor in for me. I got very interested in the idea of metamorphosis, and the amazing process by which the caterpillar completely liquefies and reforms as a butterfly (hence 'Slip Into Liquid'). Eric and I did a lot of discussion about this and other butterfly specific thoughts, and watched butterflies, and then each of us came up with ideas separately, and brought them to the studio. We started out with some written things, not one of which made it onto the final album! Sometimes a starting point is just a starting point, and never needs to become anything more I guess.

I then asked Eric:

Eric Mingus: You made the connection, so it’s there. I don’t think it was a heavily intended connection, certainly wasn’t with the music, as we were more focused on the evolution of the butterfly. For sure, it was in the mix when I began writing the words. Nabokov wrote much of Lolita while on butterfly collecting trips.  - 'Nabokov’s Net Needle and Typewriter!'

I don't want to bang on about this LP, not for much more than to say it's a trip, and an excellent example of collaboration. There's a lot going on here - but you don't have to hear all the background stuff I'm thinking is there. Hell, song titles like “Bugs in the Sun”, “Wrapped Up Tight”, “The Inconvenience of Wings’”should be sufficient to pique your interest.