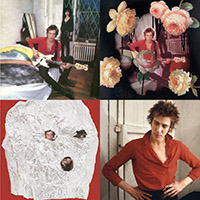 In his words, “Destiny Street” was “high pitched sludge” and a blaring mess by the time it hit the racks. Hell, however, was past caring, his musical career spluttering to a halt after some junk-sick touring not long after. Apart from some posthumous collections, a solitary new song (“No”) and the Dim Stars project, he was done. Or so he said.

“Destiny Street Repaired”, as the exhumed record was known, used the original beds and new vocals, bringing back Ivan Julian on guitar with assists from Marc Ribot and Bill Frisell, in the absence of Quine.

“Destiny Street Complete” is a double CD set containing a re-mastered version of the original songs, “Destiny Street Repaired”,  a completely remixed “Destiny Street” (save a couple of missing tracks whose tapes were still MIA – “Repaired” remixes had to suffice) and  a good number of demos.

Overkill? Not if you’re a fan.

Following the career of Richard Hell has been infuriating. He’s a fulltime writer now and one of prodigious talent, but his books have been relatively few – most notably “Go Now” and “I Dreamed I Was a Very Clean Tramp” – which are both first-class, debauched reads. Since ditching music, Hell has focussed on poetry and writing for magazines (remember them?) which were mostly hard to find – although he did find his way into the pages of Spin for a time.

We’ll take it as read that you knew Hell was in early versions of Johnny Thunders and the Heartbreakers and Television, and that he never recorded anything with them but demos. The Dim Stars records were underdone - and that band dissolved quickly after a fall-out about pay. But the musical side of his ledger does endure, not only in the bona fide punk classic, “Blank Generation”, but in him bequeathing his fashion/style sense to some wanker who went on to manage a band called the Sex Pistols.

By his own reckoning, Hell’s ego is massive, so of course “Destiny Street Complete” has voluminous liner notes that are as detailed as they are self-scathing. There’s no need to repeat the track-by-track dissection, but it helpfully credits the guitarwork.

Musicians are their own worst critics so Hell’s loathing for the 1982 version might have been taken with a prodigious pinch of salt. Once you’ve heard it, however, there’s no denying that the remixed “Destiny Street” really does leave its original incarnation in the dark.

There’s more headroom in the mix and the interlocking thrust and parry of the guitars of Bob Quine and Naux rise to the front with good separation. The harshness falls away. Hell’s own rudimentary bass-work has much better definition and his quavering vocal isn’t fighting for space.

Any reservations about “Destiny Street Repaired” can be set aside. Most of the songs have tweaked arrangements with fresh licks and lead breaks that make you sit up and wonder why they hadn’t thought of “that” in the first place. The answer being that they probably did - but buried it in the mixdown. Julian, Frisell and Ribot are tremendous players.

The vocals were re-recorded and Hell’s voice is intact – surprisingly so for a superannuant who’d given the singing game away. “Ignore That Door” sounds even more desperate in its reincarnation. If you disliked Hell’s yelp what are you doing here anyway?

The demos are worth the price of admission. I’d long been hoping to hear a studio version of “Funhunt” and the early version of “Kid With The Replaceable Head” (naively conceived as a pop song) has a nascent charm that makes it stand apart from the subsequent 45 and album track.

The unexpected plus is a stark version of “Time”, recorded by Hell and Julian at the Quine Memorial in the CBGB Annex. The lyrics are surely among Hell’s best and there’s no blankness his vocal when it starts to choke with genuine emotion. Julian seems to get the wanders in the lead break but it makes the song all the more real.