Covered in punk and glam bruises 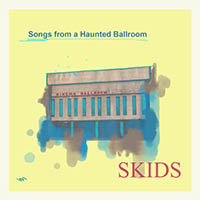 Glam via Bowie, Roxy, Ultravox! and original punk, this LP is intense.

I don't like cover bands as a rule. Very few get close to improving or mimicking the original (even if they did write the original). And as for the Australian series “Like a Version' - what a rubbish gimmick.

In case you didn't know, The Skids reformed in Scotland more or less as a fun thing a few years ago, and in 2018 released a new LP ("Burning Cities" on No Bad Records) which I also have ordered from my long-suffering record shop.

This is from a Louder Than War review of "Burning Cities" in 2018:

Who are the biggest, most popular or hippest ‘rock band’ currently? Foo Fighters?  Royal Blood? Arctic Monkeys? Queens of the Stone Age? Whoever it is – the question is:  Can The Skids – a band who formed in 1977 and split in 82 – reconvened in 2016 – compete with them? Can they make an album that music-buying Joe Public would see as being on a par with the bands of Today?  If they get the airplay, the push, the platform – can they take off and be a best-selling contemporary rock band again – like they were in 1978 or like million-sellers Big Country were in 1983? Based on this album they can. Or should, were there any justice in the fickle, back-biting music industry... every Manics, Green Day and U2 fanatic should give it a listen too and it should be all over the radio.

"Songs from a Haunted Ballroom" is such a wonderful LP I don't quite know where to begin. First, it's a tribute to a venue - they really are sacred places, you know - the Kinema Ballroom in Dunfermline, a nightclub that from time to time turned into a concert hall.

The Skids are probably better known for a kind of punky-pop in the early 1980s - but they were initially a punk band back in 1977, a fact which shines out here like Sunday morning on a whisky hangover. The thrill of punk (as I remember it) was the fizzing, scalp-crawling excitement of hearing something utterly brilliant, whether it be new or old, as long as it trumped the incredibly dull malaise of the everyday.

Certainly punk warped, developed and discovered/ made different avenues of expression here in Australia - Brian Henry Hooper, Tony Pola and Spencer P. Jones were all of that ilk, as were Dave Graney and Clare Moore, Dave Mason and a horde of others.

"Young Savage" opens, and it's a violent cracker. If you never heard Ultravox! (with Foxx, not Ure), you can hear where the Blitz and London club movement kick-started. Interestingly, you can hear Foxx's influences (Roxy Music as well as Bowie) more clearly on The Skids' version than on the original – “anything goes where no-one knows your name!”

But why a covers LP? When Nick Cave did his, it was because the band knew he had an album to record, and didn't have any new songs at the time. Siouxsie and the Banshees followed suit the next year, as I recall. So how valid is a covers LP for The Skids?

The Skids’ Richard Jobson answers that in this an interview:

The Skids always did covers when they payed live, [even] at Eric’s we did ‘Violence’ by Mott the Hoople, sometimes we did ‘Janie Jones’ by The Clash, often a medley of songs. Every night we changed it at the sound check just to make it more fun for us. We would learn another song that we loved and then just play it that night in the set, and it was not always punk bands, it was often obscure stuff, something The Skids always did! Even on the recent tours we did a medley in the middle of the set, Buzzcocks and the Pistols mixed up with a whole array of different things. Sometimes there would be a couple of Stranglers songs like ‘Hanging Around’ or ‘No More Heroes’.

One of the things that makes "Songs from a Haunted Ballroom" so satisfying is the clarity as well as the emotion of the lyrics - Jobson's voice is nothing short of astounding; The band’s version of The Clash's "Complete Control" is overwhelming; and as for The Adverts' "Gary Gilmore's Eyes" that's just vast, venomous and horridly still relevant; and then Nick Lowe's "Heart of the City" is transformed into a real barn-stormer; I mean, the original is damned good, but this fucks your dad then kicks out the jams.

So, what's this about the Kinema, which of course I've never heard of? Jobson explains that "[the Kinema] was this legendary venue in the east of Scotland – it was like the Barrowlands of the East and everybody played there. David Bowie played there, Roxy Music played there, I think even Led Zeppelin played there. Because that was our nest and that was our epicentre, we encouraged all the cool bands to come. We managed to convince The Clash to come and play, Richard Hell and the Voidoids and the Banshees. I mean it was pretty cool, we persuaded loads and loads of bands to come. I mean obviously the deal was that we would be opening act, so we got to play with them all."

I guess that's the answer to those bands trying to find a gig - find a venue which ain't making money, and make friends with the owners while dragging along talent and every punter you can lasso.

Magazine's "The Light Pours Out of Me" - the original is simply magnificent, a simmering, bubbling pot of maleficence; here it shines with kaleidoscope poison, with a bass sound which just wraps around inside your skull. Just fabulous - Jobson's vocal updates things somewhat - mimicking Devoto to some extent, but in the chorus there's a definite late PiL-esque echo.

David Essex's "Rock On". First, a bit more background from Jobson: "There was one particular gang, from Dunfermline, called the ‘AV Toy’ and they were notorious all over Scotland.  They were really pretty nasty and ‘Rock On’ was their theme song ... they would go to the DJ and tell him to play ‘Rock On’ and the DJ would always do what they told him.  That meant there was going to be some massive confrontation." This story walks right into the Skids' streetscape noir circa "Bladerunner" (you know, the story by PK Dick).

With that in mind...

Mott the Hoople's "Violence". Damn. I need to dig out all these old LPs again. Not even sure I have any Mott any more. What a scar of a song.

"35 Millimeter Dreams" you might not know. It's from the 1977 "Ghost Writer" LP by Garland Jefferys, who I had to look up. And promptly put in an(other) order to my local record shop.

The Sex Pistols' "Submission" is one of the songs on the "Bollocks" LP I frequently skip, usually because of that 'fuck you Malcolm, here's a love dirge' aspect. One of the Pistols' songs which is brilliant, but I don't need to hear. The Skids' version is still heavy as fuck, funny (check out the backing sounds) and has pace and attack where the original didn't. I guess Lydon will send his hired goons round now.

"New York Groove" was originally by the band Hello in 1975 - Ace Frehley covered it on his solo LP in 1978; and what do The Skids do? They plonk a slammin shard of pop mania into our laps. Listening to the original - and Mr Frehley's - I discover what I suspected. Hello's version is glam, groovy, but ultimately not huge, though I would think it did good things on the dancefloor. Ditto Frehley, to some extent. It's so ... groovy, almost laid back... but what The Skids do is to dump some attack in there, then adding a tad more pace, along with the impression you can imagine a huge crowd dancing to The Skids. This is easily the definitive version as far as I'm concerned.

Uh-oh. We're up to "I Wanna Be Your Dog", originally by some outfit from Detroit who, to most people, were a joke for most of the ‘70s and much of the ‘80ss. I've seen bands who namecheck The Stooges as an influence, but who should more properly mention the MC5 or Birdman, or The Fun Things. Or the Hoodoo Gurus. So. The Skids take ownership of "Dog" in a way few bands have done. Jobson's vocal is borderline heartrending. I'm a pedant - while this one could've used more pace and stoner groove, this FUCKING high-wailing guitar slices open tins of peaches at twelve paces. Wonderful.

The Skids' own "The Saints Are Coming"; this is no has-been version. We've all seen old bands revisiting their terrain. Much of the passion has gone. Understandably. Not here. I repeat, the passion, fire in the belly and squitters from too much chapatti curry is still here. Killer. The original came from a different place. We've moved on.

Their other self-cover, "Into the Valley", is once more so much bigger. Jobson's vocal has matured and is now quite an extraordinary instrument. I now recall why I didn't like The Skids so much at the time, though I suspect that if I'd been able to see them, that would have changed abruptly. Weirdly, I'd pick this as the most commercial song on the disc; it's damn good too.

"Christmas in Fife" is (I think) a new Skids original; basically a Scots reel as a celebration of life, but pretty damn funny. Can't imagine them getting away with these lyrics in 1981 though:

Although the next bit is right up Charles Hawtrey's alley (oo-er! Missus!)

Throught "Songs from a Haunted Ballroom" it's Bruce Watsons' guitars I cannot get over ... such brilliant sharpness, like scalpels in an underpass brawl. Breathless, scything, bright red on shiny sharp. While their original guitarist - Stuart Adamson, who formed Big Country with Watson - broke the mould and made the crown... Watson now wears (and deserves) it.

One of those magnificent records you put on at parties to get people drinking, dancing, fucking in the shrubbery and pissing on next-door's gardenias.

Seven bottles out of five. Play very fucking loud while dancing round the room like a dickhead.