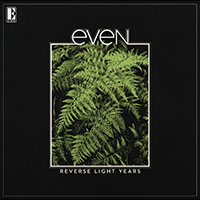 Ash Naylor is arguably the hardest working “stop and go man” in Oz music. He, (Wally) Roderick Kempton II (bass) and Matt Cotter (drums) make a formidable three-piece. And a durable one.

Remember, there have been no line-up changes in Even's 27-year evolution, with additional players only added if needed. And Naylor has a vast resume that includes solo work, SBS’s “Rockwiz”, a collaboration with Paul Kelly, membership of The Stems and more. Ash’s production on “RLY” features input from Bill McDonald and Chris Dickie, who add their polish to the final product.

I purchased the double CD on spec, after listening to the teaser “Cherry Afterglow”, and waited patiently for its arrival before Xmas. “RLY “is a neat package, keenly priced with the obligatory sticker and free digital download, along with a bonus download of Naylor’s “Sountracks V1”.

After just two listens of "RLY", I was hooked. In these troubled times (ITTT) it’s just what is needed by a fanbase starved of live music. “RLY” is a generous mix of ballads, power pop, power ballads, (prog) rock and, most satisfyingly, some EPIC long album tracks – a feature of decades past. Pleasingly, it also has a “live” feel to many tracks.

We all know Naylor is the master of catchy pop tunes with simply structured, sing-along lyrics (“Stop and Go Man”, “Black Umbrella”, “Rock & Roll Saved My Life” (ain’t that the truth), “Mayfair Laundry Bus” and “No Surprises” among a host of others. Even builds on nearly three decades of material, including unforgettable live shows  - especially, the famed Xmas outings, to produce  the masterpiece that is “RLY”. Hints of this evolution and maturity were evident with the last record, “Satin Returns” (2018).

Naylor’ s songs here draw heavily on influences from the Beatles and for me there are traces of The Chills, Bowie, Neil Young, Oasis, Supergrass and The Cruel Sea among others. This makes “RLY” an album for the ages.

Why the review? As a keen supporter of the local music scene (Sydney born ‘n bred), I was motivated due to the suspended – and already delayed Album Launch – thatt was meant to go ahead at Mary’s Underground (formerly The Basement) in Sydney on January 7.

It’s timely to review the album, plug the artist, and more importantly the industry, which frankly, has been left dangling on a shaggy Circular Quay rock by our policy makers with their fickle laws as they relate to hospitality and the arts.

Now, more about the songs.

These almost matched by the opening “Cherry Afterglow” which was the album teaser in cyberspace, the fast ‘n’ punchy “Be Still”, and “Dandy Stomp”, another catchy modern ballad loaded with beaut harmonies.

The standouts on the second disc are “Starlight Caravan”, which is another future standard. Its soaring guitars give it a euphoric uplifting feel and with a change of tempo at the end, this one’s a modern-day ‘”Evie”.

(Credit: A big shout out to a longtime friend Mick F, who steered me into Even’s path years ago. He is the best power pop support man going.)

“RYL” is visionary, welcome and much-needed release for fans of contemporary pop/rock. Here’s looking forward to the day, perhaps fittingly, when Even plays a Xmas in July show in ’22. Until then we have “RLY” to enjoy!  It’s summer, so just drink (buy) it!