Written by Robert Brokenmouth on 22 December 2020.

These albums by Japanese bands Mad3 and 2yago were pressed into my hands by one, Paul Slater, who runs the 3D Radio show ”'It's Always Rock'n'Roll” out of Adelaide on Monday nights (and whose adverts occasionally send him to Facebook Jail.) Paul is one of those music nutters who often knows the people who make the music, and has travelled overseas (France, Japan, UK) just for the bands (rather than the touristy T-shirts, towels and gastro).

"Rock'n'Roll Undead" is two CDs played at Mach 15, taken from assorted singles and such from over the years. As an introduction to a band, it's seriously addictive and will have you emptying your wallet, selling your beloved and donning greaser leathers and heading to burlesque shows with perverted relatives. In a nutshell, if you don't have this in your collection, you hate rock'n'roll and it's time to ditch the AC/DC and bring out your mum's old Horste Wende records.

Just the first song, "Jack the Violence" is worth the price of entry twice or more over. The Cramps would love this guy. Every line-up here boasts a rhythm section to die for and a belter of a sound which you can only react by squealing like a scream-teen in a bad slasher.

Some have described them as a wild instrumental surf-rock band, but nah, there's so much more. Take "Guitar Hero" with its frequent musical reference points cannonading through you like a history of great rock'n'roll in what feels like two minutes. You'll be awed, seriously.

Like Dick Dale, they need to be played REALLY LOUD to get the full effect. Brilliant guitar runs, punctuated by stops, starts and shrieks. They just never stop, and if the CD stops you find yourself still twitching and looking around in a daze, the curtains in shreds, two bookcases splatted on the fish tank and the family dog nailed to the wall. So, yeah, Mad 3 are a bit like being force-fed ice and LSD.

So play Mad3 LOUD LOUDER LOUDER, it's a much better way of celebrating the bogus holiday season. 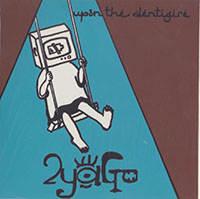 No idea what they're on about, but the come across in the first instance like a grumpy gorilla with a girly voice enticing you into the pit. If they're not influenced by Zappa then they've got a similarly bonkers musical funnybone (let's hope the lyrics are less laboured).

The songs are all fairly short, but with complex arrangements, and you're never sure whether you'll hear a woman's voice or a man's. Just the first song reminds me of Kid Whatever and the Coconuts, the B52s, and a bunch of hardened prisoners rolling downhill playing the kazoo. Oh, the guitarist is fucking brilliant - huge racket, judiciously unleashed (ie, short bursts which capture your attention before your open mouth is pushed shut, then drops open again). So, yeah, 2yago are also a bit like being force-fed ice and LSD.

If you don't get the idea by now, you never will. However, I'm fucked if I can find any way of contacting them or ordering their CD. Paul Slater may have a better idea. And, you can pester Eddie here.