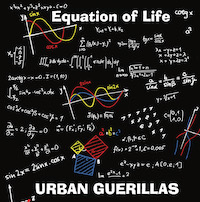 These Guerrillas are a "real" band (as opposed to a "studio" one) but also an enduring manifestation of the activism and creative spirit of vocalist-guitarist Ken Stewart, a transplanted Adelaider who cut his musical teeth in Sydney’s flourishing underground ‘80s scene and let his name to myriad causes. Unrest is never far from his songs' surface. You can take the boy out of the protest but you can’t take the protest out of the boy, you might say. Stewart’s credo of “Pop not guns!” sums it up.

Picket lines are one thing but It takes musical balls to tackle the Small Faces’ “Afterglow (of Your Love)” and even more ability to pull it off. Although Stewart can’t soar to Steve Marriott’s stratospheric vocal heights - who can? - he and organist/co-arranger Neil Rawle do a stunning job on a classic. The title track is a keeper and there's food for thought in "Bandage the Heart".