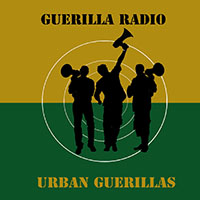 “Guerrilla Radio” is a seven-song EP that, in typical U.G. fashion, runs the stylistic gamut. The title track is killer folk rock, a condemnation of franchised, corporatised airwaves that would have done Joe Strummer proud. It’s as close to an anthem as you’ll hear these days.

“No Walls” is “The Theme From Rawhide” with lyrics about Mexicans. Draw the dots and you’ll find Trump. “Iron and Steel” is a tough rocker with strangulated Peter Garrett vocals. Where did that Oils support spot go? There’s some some formidable guitar-work from main man Ken Stewart and the sound isn’t far removed from that of their good mates, Spy vs Spy.

“Sailors and Dockers”, on the other hand, is a sea shanty. I hate sea shanties. Get in the fucking sea. Diddly-diddly-o? Put this one in a chaff bag and send it to the bottom of the ocean. Please.

“You Are The One” is all personal with no politics. It’s OK. Less said about the acoustic “Viva Revolution” the better. Fidel was actually a murderous prick who smoked a lot of Cubans (geddit?) “Jesus is Carrying a Gun” is a staccato burst of punk. No more, no less. Bracing.