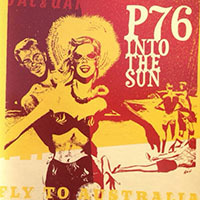 Along the way, there’s been a stint as a founding member of garage supergroup The Stoneage Hearts and a spell on guitar for Little Murders, before a recent reformation of P76. Cue the re-release of this excellent record.

We reviewed “Into The Sun” 18 years ago and John McPharlin summed it up pretty well:

Okay, rather than beat around the bush, let me come straight out at the commencement of these proceedings and say that this album is a real corker. If your attention span is too short to read this whole review, then the answer you are looking for is: Yes, you should go out and buy this album.

Right from the opening "Me & Her, The Road And Our EJ", you can tell you're in for something pretty special. It's a hymn to girls, summer, long weekends, an open road and a car with the stereo "playing Stems and You Am I".

It may only last 1:49, but in that brief passage of time it comes closer to capturing and conveying the joy of being alive and free and happy in this great, sunburnt land of ours than a dozen renditions of the national anthem or all of the jingoistic TV adverts Dick Smith has ever made, even if run one after another in an endless cycle until you cry out in despair and beg for mercy (or the soothing release of death).

“Into The Sun” is the sound of powerpop choruses and shiny guitars. The kind of record that you’ll be hard pressed to find anywhere else than on the fringes of today’s music industry.

It’s constructed as the best albums of its ilk: There’s a brace of three killer pop songs at the front end (“Me & Her, The Road And Our EJ”, “Headed Straight For The Sun” and “Let’s Get Back To Where We started”), a couple of introspective brooders in the middle to break up the up-beat jangle (“Slow Down”, "Social Insecurity") and a quirky instrumental (”50,000-8 U-Turns”.)

Pop craves resolution and the rather stark but positive "My Sunshine" provides it at the close.

Danny has worshipped at the feet of people like Jeremy Oxley, Rob Griffiths and Dom Mariani so it was fitting that the latter produced this album. Dom did a dab job and the chiming, ringing guitar tones that dominate "Into The Sun" will dance on the most jaded palate. Danny's poignant but sunny vocal is fairly irresistible and he writes great songs.

Driving songs for powerpop people. The digital version is available at Danny's Bandcamp but something tells me you might want a physical copy from your preferred store or by This email address is being protected from spambots. You need JavaScript enabled to view it. MIckster at  Off The Hip.