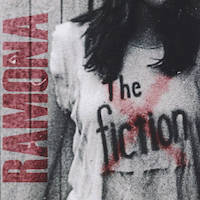 The Fiction’s life-cycle of a year was interrupted by Griffiths falling seriously ill. There were recordings - a rehearsal has been issued as “Negative Fun” and two subsequently demoed songs were released as the first single for Little Murders, by which time The Fiction had dissolved.

Fast-forward to now and “Ramona” is a bunch of contemporaneous pop-punk songs, written by the reconstituted band in the spirit of its original material. “Ramona” has 10 songs and clocks in at 21 minutes so expect no prog rock. It’s pared-back and lean and moderately fast; the less than breakneck tempo gives the songs space to breathe.

Rob Wellington’s sustain guitar cuts a swathe through the tunes. Griffiths’ laddish vocal and innate love of a melody are both distinctive and hard to beat. Drummer Al and bassist Adam Learner - both newcomers to The Fiction but blessed with with old heads - add backbone and bite. The results are urgent songs full of tunefulness and power. There’s an economy to the songs that’s true to their spirit.

“Whatever It Might Take” could have stepped off an early Ramones album. If “Birdman” is a tribute to you-know-who, it’s pretty oblique. It works, though. A relentless bass-line underpins and drives “My Ramona” with scattergun guitars bringing the grit. “Elevator Man” would have been equally at home on a Little Murders record and has a wonderfully guitar twisted solo.

Re-invention of this sort should be a surprise to nobody. The Fiction even scored mainstream media attention in their hometown with this release - and toured it in Japan. The irony of a Victims EP of new recordings coming out on the heels of “Ramona” also shouldn’t be lost on anyone.