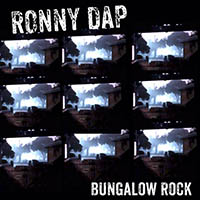 "Bungalow Rock" is dripping with big riffs, great drumming and the humour you come to expect from a Ronny Dap record. Kicking off is "Gimme Gimme Rock 'n' Roll", the perfect tune to get you rocking and rolling. Listen to the drumming - it's fucking fabulous.

"Blame Game:" has a driving guitar riff - it's a song about relationships and how they sour. "X-Plane" just kicks arse - with a little help from Pauline Hanson on vocals.

"Miss Information" is another cracker, channelling a bit of The Sweet with a line about pork pies, and is the stand-out track. "Ein Zwei Di" is driving pedal-to-the-metal, can in hand, bikini babe next to you, flying-down-the-highway sort of song. Play loud is my advice.

Then there's "Don't Care". Listen carefully to the words. Bloody fun tune, this one. "Growing On My Brain" makes me sad so I'll just skip it. Ending this magical album is the autobiographical "Forry Boys Tonight" and it's a perfect way to wind it up.

"Bungalow Rock" can be found on Bandcamp and will be released on all good streaming services next week. So crack a can, smoke whatever is your pleasure, turn it up to 11 and Bungalow Rock out; you won't be disappointed.

P.S. Whoever came up with the name Bungalow Rock should never have to buy alcohol in Melbourne ever again.