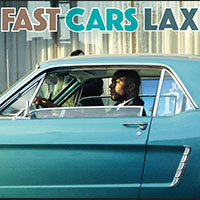 Of course everybody knows that “LAX” is the international airline identifier for L.A. International Airport, Just as it’s easy to lose yourself in that place, the same applies to the record. It’s beautifully produced by David Chapman (Zig Zag Studios) and the band/duo. The studio has been used as a tool, but the songs aren’t over-cooked or overwhelmed.

The songs are strong. There’s a 60s folk-rock flavour to “Take Me (To LA)” that leads to a Who-like explosion of rolling drums, guitars and bubbling Motown bass. Then there’s Di Levi’s vocal, assured and soulful, but vulnerable. Of course, it runs through the whole album.

The subtle Who-isms pop up again in “LA Alpha Girl” with rolling drums and some of Fabian Byrne’s guitar licks both a nod to the Modfathers. "I Feel It" locks in on a limber soul feel and nails it completely.

If you need familiarity as a lifeline, there are a couple of covers: A ripping version of The Kinks’ “Celluloid Heroes” and another of “Mr Soul” (also on the band’s “Rarebits” compilation) that Mr Young would probably dig. Its searing guitar, stabbing percussion and otherworldly lyric (and vocal) are swept along on the song’s surging undertow. The Fast Cars treatment of a classic works a treat.

The centrepiece, if there is one, is “California Dawning”, a moody and majestic pop tune lathered in strings. Di’s vocal is a little buried here, but that might have been the intent and a metaphor for being swallowed by a big metropolis.

Dream-pop is a term that was worn out by overuse in the late ‘80s, thanks to the British music press, but it does apply to “LAX”. So does psychedelic. The exception is “Crazy Good Times” which makes a detour to the dance floor. It’s a bit like the U-turn Flaming Hands took after “the industry” got its hooks into them and its electronic feel sits at odds with the rest of the record. Of course my personal biases are on show, so your own call may be different.

"LAX" is one classy album. Get it here.