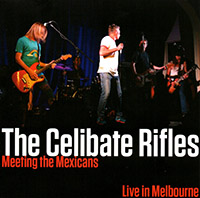 The lyrics might have got short-shrift from the critics (especially in the early days) but there’s a lot of depth to what the Celibate Rifles have to say. Their self-deprecation and piss-taking demeanour belies the presence of a couple of deep thinkers at the band’s creative core.

The band warns that there are no overdubs and the “as is” state of the recording leaves some blemishes intact. Not that you’d notice. Richard Whitty's live mix captured the essence of the Rifles - and you can make out the mandolin.

Speaking of which, the acoustic “side” kicks off with a relaxed treatment of “Shakin’ Street”, the MC5 song, and ends with a snarling “Gimme Danger”. The latter naturally lacks the disparate edge endemic in the original Iggy and the Stooges version but the (sort of) unplugged treatment sits well in its own right. Detroit book-ends.

The sunny ”This Gift” bounces along superbly. This one stands out as something different in the Celivate Rifles ouvre, a song about how good it is to be alive among other tunes about global politics, vanishing rain forests, drug addiction and the like. On the other hand, I’ve never warmed to “Eddie”, which always seemed to be in the wrong key, but the colourful “Me and Slick and Willy” reminds me that Damien Lovelock does a fine line in spoken word and that he should indulge that talent more often. With comedic support from Dave Morris.

If you were around when it came out you’d remember that “Pretty Pictures” knocked a few people sideways for two reasons - it was acoustic and the Rifles were upstart yokels from the suburbs. How dare they not wear black in Darlinghurst where, as someone once colourfully observed, it was less a colour than a way of life? This is a great version of one of their best songs, a cautionary tale of love and drug-dealing gone wrong.

So, to the "flip side" and the amped-up songs are like a fast ride home. “Killing Time” harks back to the debut LP “Sideroxylon” and hurtles along like a panel van at the top of a hilly stretch of Mona Vale Road with its handbrake off. It’s “Electravision Mantra”, however, (often a show closer these days) that does the business. Not that you’d expect anything different.

“Jesus on TV”, “Wonderful Life” and a Dave Morris joke are noticeably absent but maybe they’ll make it to the next one. Buy it here.