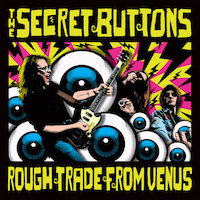 With a pedigree derived from The Fuzz, The New Invincibles and The James Baker Experience, The Secret Buttons sound like bastard children of early DMZ (sans Monoman's organ), Bored! and Mudhoney. A surfeit of melodies are crushed under a storm-front of raw sonic power.

Drummer Dave Brockwell and bassist (Sir) Jade Ikin lock in nicely enough, but it’s the guitar and flame-thrower vocal of Jiah Fishenden that dominate. Their sound is more raucous than a bus full of happy clapping evangelists being driven over a cliff. So kick back, turn up the volume, praise the Lord and pass the hollow-tipped ammuntion.

Opener “Good Stuff” is just that with its bottom-end rumble and tightly-wound lead guitar break. “Number One” is a fuzzed-up earthmover, with a cast-iron riff doing the heavy lifting. It's a typically simple enough song but effective all the same. The Secret Buttons don't play prog rock.

“Not Hard” and “Stuntman Mike” are straight-up rockers but it’s on “The Thief” where things get extra interesting. There’s a punky ‘60s feel to this one, a surfing drop-out and some vaguely rockabilly vocalising amid the threats of kicking your arse. The fear and loathing closer, “Kiss My Ass”, ramps things right back rhythmically and indulges some extreme early ‘70s heaviness.

Recorded by Jozef Grech at Dead Beat in Perth and mastered by the ubiquitous Mikey Young, it needs to be played at stun volume for full effect.

Since they're all from Perth or thereabouts, how about a triple bill with these guys, Datura4 and The Volcanics? That'd be worth a trip to the world's most isolated capital city to see, Once the travel bans and social distancing are lifted, of course. Meanwhile, let your mouse safely do the travelling and procure a copy at Bandcamp.