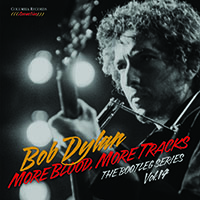 You know every song on it. A track by track run down is unnecessary. You just want to know if you should plonk down your fist full of dollars for something you already have.

This isn't a remaster or a remix. This is all the songs performed in an unfamiliar aesthetic.

Let us listen to the sick child pushed to the curb. It revels in its glories. Its intimacies. Even on first listen, you grasp an understanding of the songs that you never had before. It's like Bob Dylan turned up in your kitchen to play you some new songs.

In an instant you find yourself asking why anyone would abandon such perfection. Such in your ear expression of belief.

Well there is a geist your Zeit must follow.

Time... Time changes the world. We're no longer following "Pat Garret" and "Planet Waves" and "Self Portrait". We're experiencing this reinterpretation against a background of Kanye West and other assorted crimes against humanity.

In a world of Autotune the ragged voiced man is King. And this is an album that spits against the modern world. It is raw and all the better for it.

So, to clarify. This was absolutely the wrong album to release at the turn of the seventies. Half a century later, it sounds like perfection.

But which is better? "Blood On The Tracks" or "More Blood, More Tracks"? I guess it depends on how the wind is blowing.

Regardless, this is worth five of anyone's Bottles. Buy it and argue the point. It's certainly better than nine tenths of your record collection.