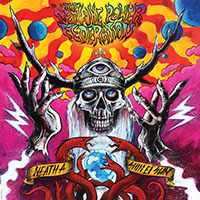 Picture yourself in the front row, chewing on that band’s lug-head, stoner rock riffs and being bombarged by their front lady who's wailing about wizards, the occult and space travel while wolfing down handfuls of gold top mushrooms.

You may just be in the mood for Neptune Power Federation, a quintet out of Sydney and Newcastle, Australia.

“Neath A Shin Ei Sun” is the band's fourth album and it’s a serious ball of fun. Not so much pompous as pisstake. Putting the schtick to one side (and “10 Megatons of neanderthal rock fuelled by Satan and space hallucinogens” isn’t bad, as far as slogans go), it has enough brash bombast, bottom-end crunch and stoner guitar to wake a comatose, two-dozen-cones-a-day vegetable from his or her afternoon slumber.

You puts yer money down and yer gets eight songs (brevity is a by-word among the excess, although a coupla songs stretch right out) with ample variety. "Neath A Shin Ei Sun" runs the musical gamut - in a Link Meanie, Sun God Replica kind of way - from heavy psych to space rock.

The membership has form, as they say on UK police TV shows, with service in bands like Your Mother, All You Can Eat, Frenzal Rhomb, Mortal Sin, Demolition High Style, Nancy Vandal and Daredevil.

You can't argue with band member nom de plumes like JayTanic Ritual, Inverted CruciFox and Search and DesTroy, either. and can't Screaming Loz Sutch sing? She has range and power in unfair quantities. It's called Lucifer Rock (among other things) so the devil probably makes her do it.

The title track opens the album and sets the scene: It starts like "Maggot Brain" (you'll need to go back to 1971 to reference that one) with vocal samples and trippy atmospherics, before exploding into a surging wall of guitars and banshee vocals. There's a soul-brothers-and-sisters breakdown that builds and takes the song out.

Scuzzy gutter rock ("Opium Den"), boogie stomp ("Burning") and mid-'70s prog fuzz overload ("Edmunde") before the warped, "lady by the lake meets the wizard king" conclusion of "We Shall Triumph".

Seriously unhinged, Neptune Power Federation comes on like Turbonegro after an amyl nitrate rendezvous with Manowar in a men's changeroom. It's stoner with a boner.

Buy it for your Mum for Xmas. She'll hate you.