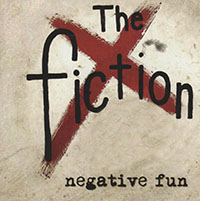 So they gigged sporadically and had a short life. The band fell apart after vocalist Griffiths took ill for a month after a big show at the Crystal Ballroom. Malnutrition will do that to you. Guitarist Rob Wellington went on to a band called International Exiles with his girlfriend - and to much more fame as a renowned video producer for people like John Farnham.

Griffiths is still turning out stellar rock-pop and is something of an under-appreciated talent, in the ilk of Mariani and Oxley. If only any of them had been given the right breaks, internationally, at the right time…

“Negative Fun” is a rehearsal tape from The Fiction’s earliest pre-performance phase (that’d be early ’78.) At that point they were a bass-less trio. Let’s not be too precious about this: It’s raw, rambunctious punk rock and recorded for self amusement and/or reflection. It was not intended for release. Nothing was finessed and the band was still coalescing. Count-ins and breathless chatter remain intact.

It’s an artefact and, as such, probably essential listening only for the obsessives and dilettantes who were there at the time - or weren’t and want to catch up. In some ways it’s as revelatory as the retrospective “Dumbworld” release for Chris Walsh and Garry Gray’s Negatives and Reels, who pre-dated The Fiction and arguably were more nihilistic.

Here's a thought: I’m not suggesting that The Fiction and Sydney’s X were even remotely aware of each other, but their common use of a single X as a logo shows great minds can think alike, even in isolation. A couple of The Fiction songs (“State of Execution”, especially) could have been X numbers. The Ramones were yet to set foot in Australia but “Subterranean City” betrays what might have been some peripheral influence.

Griffiths’ voice is muffled in the mix but you get the idea. This is “shout and deliver” and not in the vein of subsequent Little Murders line-ups. Wellington’s guitar attack is as primal as you’d expect from a punk band of the time. Drummer Vic Bolger’s timing is a bit up and down and punctuated by Moon-ish explosive fills. This is a band that’s at its beginning.

There were demo's recorded but they seem to have been lost in the mists of time. Judged on its merits, you might not play this constantly but it has its own charm.