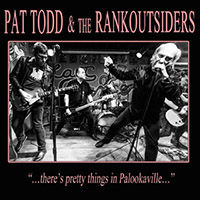 You’ll want to shout, move around, charge a glass and turn up the record even louder. You’ll want to get to know these stories of love, loss, addiction and redemption.

“All the Years #1” is a different version of a song released in the course of The Rank Outsiders’ five previous albums, but Pat and his band don’t live on past glories. Cock an ear to the Heartbreakers guitars in “Way Deep Down In Your Heart” or the rollicking “They’re Wrong/Dead Wrong” and that’ll be starkly apparent.

It’s not just Todd’s commanding voice and the vignettes within each song. The sinewy guitars of Nick Alexander and Kevin Keller contain enough firepower to torch half of Downtown L.A. faster than a protest march with a bank of CNN cameras filming Plus, the rhythm section can turn on a five-cent piece.

If the triple punch opening of “All The Years #1”, “Cheap Nostalgia” and the hooky “The World Doesn’t Care And Neither Does She” doesn’t grab you by the ears from the get-go, you’re deaf and in a deep freezer. But it’s not just about the power. A command of dynamics is the making of many a band and the slow songs here deliver, too.

Speaking of, Todd and the band own “Turn Back The Hands of Time”, the 1970 hit for Tyrone Davis and sole cover, applying their own veneer of dirty guitars. Then there’s the greasy, harmonica-flecked country blues of “Read ‘em & Weep”, a postcard from hometown Los Angeles from which the album derives its title.

“Nothing But Excuses” is a hootenanny and a hoot. “To Get That Monkey Off My Back” a blazing rockabilly driving song. “Little Jael” was a stab at the sound of the Every Brothers that the band had reservations about, but it works as well as anything else here.

“I Will Lie To You” is the most honest song you’ll hear this week or the next, and there's a hint of "City Slang" to "Hello To Mystery", where Nick Alexander takes the mic.

You can’t fake passion and it seeps from all 16 songs. Grab a copy at the link below and tell me I’m wrong.