Written by Robert Brokenmouth on 12 August 2018. 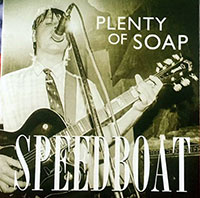 If you enjoyed the Laughing Clowns and their slightly wonky, soaring horns, and which Hunnas later wielded to equally great effect, you're in for a treat. Speedboat (from Adelaide) supported both bands and, I can attest, to great effect. While LC and H&C certainly influenced Speedboat, one wonders if the influence was all one-way.

If you don't know Speedboat, what they were about came from many unlikely sources (their name apparently springs from an Elvis movie), and I'm not giving away the joy of Tom Stehlik's liner notes).

Liner notes? Do Speedboat rate that?

By fuck they do. 'Plenty of Soap' holds the equivalent of four LPs plus a fistful of singles and b-sides, Stehlik's liner notes actually tell the story of the band. Frankly, most bands - especially a band held in such high regard as Speedboat (and all without a recording contract) - fuck up entirely.

This ripper (three CDs) cost me $A30 plus postage and frankly that's a damn steal.

Speedboat were one of Adelaide's top bands for many years. And no, unbelievable as it may seem (especially when you hear these songs) they never released a damn thing, not one single or EP, never mind an LP. Their demos had heavy rotation on 5MMM, the local independent radio station (now 3D), and we always expected vinyl to emerge, but it never did. Singles, EPs and LPs emerged from an avalanche of band in the Eighties, many if not most now thankfully forgotten.

But Speedboat were hit with what I called 'the Adelaide curse' - that is, they were too good, and too advanced, for a market beyond Adelaide - unless they upped sticks and moved to London or New York. Where they would've caught on in the time it took to read 'Mandrake' in the Woman's Whateverthatmagazinewas. Some things are best forgotten. Speedboat are best remembered, and really, now you've read this, you have no choice.
I could wax poetical about Speedboat and gigs gone by, but for now I'll cheat and reveal that, shortly after signing Hunnas, Gudinski told Speedboat to go home and "get that Melbourne guitar sound you're lacking.''

I can only presume Gudders recognised that he wouldn't be able to exert control over the band, so sent them away with a suggestion which would cause the band to self-destruct. I could, of course, be wrong, but ... like I say, Hunnas were going great guns and the similarity of Speedboat, plus their drive and brilliant, precise arrangements (courtesy Arnold Strals, a veteran of the hit parade (with Sister Janet Mead)) might have seemed like too much competition.

Get Speedboat from This email address is being protected from spambots. You need JavaScript enabled to view it. 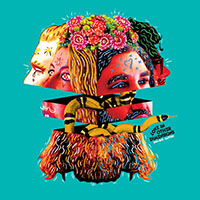 I've heard good stuff about this outfit, and while I confess to listening to "Love in Other Diminsions" straight after "Plenty of Soap", don't let that fool you. Dave Graney loves GGS, and who can blame him? There's an aura of sex, restrained sex, coy flirting and shameless hussying about them - rather like the big DG himself, perhaps.

I bet they're immaculately turned-out onstage, too.

Groovy, kinda mellow and kinda up, smart, tuff and they want to rub their rude bits in your face.

Groovy, kinda mellow and kinda up, smart, tuff and they want to rub their rude bits in your face.