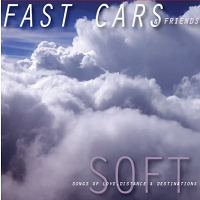 The last album “LAX” never moved far from the head shops of the US West Coast and that’s where a song like “Space County (Monaro)” lands - even when it's about the rolling hills of New South Wales around Canberra. Sharp guitar lines, courtesy of ex-Lonleyhearts guitarist Tom Watson, provide the electric spark that brings the song to life. Add a splash of banjo and Di’s haunting vocal and you get the idea.

Things drift in the middle: "Precious" is so gentle and unpropessing as to border on twee. "Stems (Do You Know Me Too?)" is understated and "The Tide" is baroque and just a little obscure for these ears. "My Destination" is a minute too long but is saved by some nice guitar in the outro. Closer "And So I Whisper" moves sideways into strings-tinged country territory and does wind things up nicely.

The folk thing bcomes a little too pervading. The problem with ethereality is that all those clouds start to look the same after a while and you float away. So it is with too much of "Soft". In the end, Fast Cars manage to avoid hypoxia (look it up!) with a few deep breaths of guitar. The landing might be too gentle for some but the promise is that the next record will be called “Hard”.