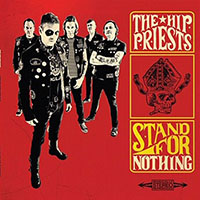 The Hip Priests are angry as fuck and want you to know about it. The urgency and energy of past albums are intact but leery innuendos and odes to drinkis-and-drugs excess are toned down on their latest long-player, replaced by a seething fury.

There's no mistaking the target of the musical Exocet that's opening track "Welcome To Shit Island". It's an all-guitars-blazing assault on the pro-Brexit brigade wrapped up in a punk rock letter bomb. And there's more in store on the other nine tracks - with a focus on everyone from the forces that would wipe out rock and roll to the man down the road at number 19. .

Hip Priests hail from Nottingham in the UK and if you think Little John's longbow was the most dangerous thing to come out of Sherwood Forest, adjust your green tights. The Priests play it like Backyard Babies. TBNGR and the 'Copters - which means they sound like all those dirty arse Scandirock bands of the late '90s and early '00s.

You could say "Stand For Nothing" is not for the faint-hearted or the hard of hearing. You would be right. You could also say Hip Priests are in that last-man-standing category of Real Rock and Roll Bands. Correct again. You win a cigar.

"Cheers to Me", the slightly more measured "Losers of The Fait" and "Robrashness of their assult. ck and Roll Leper" are representative of the band's sound. Nathan Van Cruz sings up a shit-storm on lead vocals with massed macho chorus assistance from the rest of the occupants of the rectory. Or asylum, if you prefer. The propulsive bottom end crew of Lee Love and DP Bomber puts the hot air into the hovercraft, while guitarists Austin Rocket and Silent Mike lay on the pyrotechnics. Austin's times in the lead break spotlight are especially noteworthy. Fucker can play.

Being pummelled relentlessly by all that shouty hectoring could easily get old very quickly, but the abundant energy, sharp guitar-or and strong songs never let the side down. Ballads do not abound. In fact, there are nada. "How Do You Get Off (On Getting Me Down)" backs the pedal off the metal but won't slip onto your iPod's Yacht Rock playlist any time soon. And subtlety? If a tune like "Deja F.U." (as in Fuck You) leaves you in any doubt as to where Hip Priests stand on a range of topics, get thee to a nunnery.

There's not a lot more to say. You'll either embrace the full-throated Rock Action contained in "Stand For Nothing" or you'll be repelled by its brash, sledgehammer-crushing-a-mayfly assault. You might have heard a lot of it before - but they said the same thing about The Captain and Tenile and their ship came in.