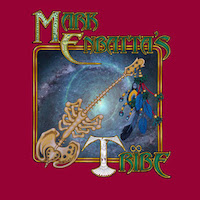 “Mark Enbatta’s Tribe” is one dark trip. Enbatta’s lyrics explore themes like death, decay and deceit. His vocal is often grim and at sometimes he intones like Mick Farren. His guitar is muscular and fluid. The 13 original songs are all Enbatta’s and evidently some were written during Lucas Trouble’s lingering departure, so the darkness should be no surprise.

At times, the band sounds like the Pretty Things in their “heavy” ‘70s era; at others they recall the Gun Club crossed with a tighter Crazy Horse. Enbatta is an accomplished guitarist and so is American-born bandmate Peter McConnel, who matches him blow for blow.

Th songs are solid, with a degree of variety. "Victim and Culprit" simmers with Thundersesque guitar. "Bubblesex" is a glammy tribute to, um, smelly panties. (Ah, the French.) "Minor Chords" recalls Neil Young, circa "Zuma", and "I'm a Fake" is a boogie-rocker.

"The Cliff" is an ethereal ballad - until the couplet that rhymes "rocks" with "cocks". (Ah, the French, again. The real surprise, however, is a cover of "Keep Searching'" where the soaring guitars and a leery vocal impart a weirdness that would have Del Shannon reeling in his grave.

You can score it as a download at the link below or grab a physical copy (LP or CD) at one of those super-slick utopian online stores like Forced Exposure.

Mark Enbatta's Tribe and the Vitnam Veterans on the Web