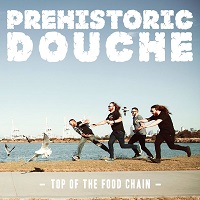 A conundrum for you: If douche is a word for “an obnoxious or contemptible person” why don’t these guys suck harder than a top-of-the-line Dyson vacuum cleaner near a split beanbag?

The intent is obvious from the song titles and long before you first drop that stylus into the groove. The Douches want to wind music back to Flintstones days, stripping it bare until there’s just fuzz left on the bones. Thirty-somethings on drums, bass and two guitars. What you see in their artfully posed cover St Kilda Beach photo is what you hear.

Zappa rhetorically asked if humour belonged in music and the answer’s right here. Eight songs and there’s a droll dad joke in most of them. What’s not to love about the “primordial cordial” chorus in the song of the same name, especially when it’s about going on a bender?

Sonically speaking, Prehistoric Douche are Melbourne’s equivalent of Sydney’s Crusaders without masks and playing a little slower. The playground they’re both in is familiar but each brings something of their own to stand out from the rest of the kiddies.

If you know garage rock, you’ll take to this like a bin chicken to cold chips. The key is in the rhythms: Drummer Reeces Pieces thumps the tubs like an ADHD Bam Bam on a double dose of Ritalin. Bassist Moontan locks it down, while his vocals pull up just short of a shriek and hang in the air like a dinosaur’s fart.

Shifty D and Hygiene are a fine double act on guitars, sparking off each other with the sort of nimble licks and runs you don’t often hear in a garage band. Case in point is “ice Age” where they duck and weave like punch-drunk would-be MMA fighters on the steps of Sydney's Star Casino.

It’s not just that ‘60s sound. There’s a Sabbath riff thick enough to chew on in “Cave Gurrl” and it’s sitting on a distorted bass-line, the likes of which nobody’s heard since the last seven Cosmic Psychos records. “Primordial Cordial” hints at Oz Rock before setting sail for the murkier parts of the swamp.

“Surfing Douche” (the B side of the single) is clever in its bastardisation of the surf genre (and sounds a lot like the Crusaders and Radio Birdman, now I’ve had a chance to think about it) while “Megalodon” owes a large debt to the Cramps and would be a fine theme to the next “Sharknado” movie.

If you get your kicks in a garage that frontsf Route 66, you'll dig it. It's all fun, fun, fun in that warm Melbourne mid-winter sun.