Trouble Is Our Business - Plastic Section (Off The Hip) 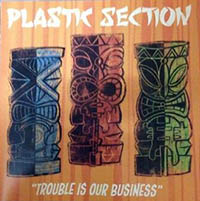 Way back in the last century, there was a band kicking around Sydney called The Milky Bar Kids. They were minimalist rockabilly, stripped back to the bare basics of stand-up bass, twangy guitar and a tiny kit. They had simple songs, in the style of early Elvis, and they were wonderful.

Fast forward to a bar in Wales a year or two later and I laid eyes (and ears) on a similar band whose name is lost in the mists of time. Again, it was a bunch of people tapping the source of rock’s roots and it was as enjoyable for its raw simplicity as its songs.

The international angle is important because the band being reviewed has that sort of history. Vocalist-guitarist Ben Edwards is an ex-Sydneysider based in Melbourne and has another line-up of Plastic Section based in Bangkok.

Plastic Section’s name mightn’t tell you where they’re coming from but it’s obvious when you slip “Trouble Is Our Business” into the CD player and hit Go. Wrapped in reverb and draped in delay, it’s a throwback to raw and simple musical times when auto-tune was something you might do to a car one day in the future and Jay-Zee was still just an itch in his father’s pants.

There’s nothing new in rock and roll and the maxim applies to “Trouble Is Our Business”. When it’s done as well as this, it doesn’t much matter. From the strutting instro “Blue City Stroll” to the swaggering title tune and the stuttering “Yeah Yeah”, it’s an enjoyable if unexacting romp. If you want pomp rock, download that Queen movie on Netflix. Be warned. No good ever came from a biopic.

For an ex-sludge rocker whose band Kemosabe recorded an (unreleased) album with Jerry Teel and Tim Kerr producing in the USA, Ben Edwards sure has a deft touch on six strings. His Melbourne band is pretty adept with bassist Pip and drummer Matthew Barker keeping it simple and effective.

There are lyrical illusions to voodoo and girls, of course. Graveyards and beer get honourable mentions. It’s not deep or philosophical. It’s rock and roll - it pure form. The uncomplicated production is just right.