Written by Robert Brokenbmouth on 22 October 2019.

Play it in the car but keep your eye out for the boys in blue, you'll be doing 90 in the car park before you know it. You'll do do-nuts, too.Also reviewed by The Barman here.. 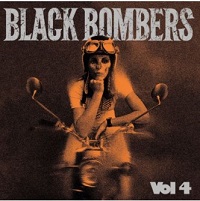 The Black Bombers (who also come from England) are a different, more monstrous animal. This is a good thing. They're uglier, more powerful and really damned dangerous.

You'll spot their influences, no doubt (like the Pink Fairies, Stooges...) but that ain't the point. The Black Bombers drag you away into the sunset which turns out to be the entrance to hell... look up, you can see God peering down from heaven and whinging about the fucking racket.

On top of which, great, well-proportioned songs with tunes you'll be mumbling to yourself after you pick yourself out of the wreckage of the toy shop you've just driven into. 'I was listening to The Black Bombers' should be a valid excuse for causing mayhem on the roads in all countries. Previously reviewed here.

The Filthy Gypsies are from Adelaide...OK. This recording doesn't capture them properly. That's the truth. The drums are a tad too up-front, and the vocals not enough. Ditto the monstrous guitar and bass. 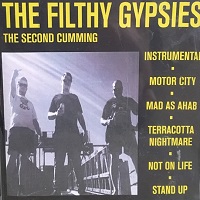 But... well, fuck. The EP starts out pretty damn good and by the end you're molten marshmallow. Don't play this when you're driving, you'll be teaching the car to climb; either that or you'll drive off a pier bellowing along and hammering the wheel. Yeah, they really are that good.

Songs like “Terracotta Nightmare” are so much the Australian experience, brilliantly put together. The songs - man, the construction is just inspirational. And yeah, you'll be singing along.

Live, they're a force of nature with an occasionally mild-mannered singer/guitarist. Also, if you're a guitarist, you're gonna want his guitar. Big, brutal, damn powerful; hooks, grinds, lyrics you'll remember and wake up ranting along.

Buy their EP, and unless your missus shares your taste in music, you'll be separated in no time.You can score it here.

Oh, and: rock nerds will recognise the compliment paid on the back: thanks to Frank 'where's my money boys' Portolesi - this is Frank of Custom Music, famed for constructing the Woogie amps.