Written by Robert Brokenmouth on 04 February 2018. 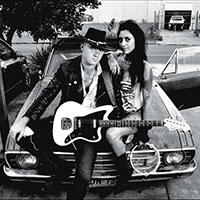 "Ubermensch Blues" is a damn fine LP. Big and moving, it's not a simple thing. Lots of space within the melodies and complex? You'll be returning for repeat listens. Remarkable given that almost the entire work was recorded and played by Sydneysider Rhyece; such LPs don't usually work in my opinion. And what's that title?

Overman Blues. The Nazis thought they were ubermensch; the Japanese and Chinese still know they are. Hell, ever try to talk one-on-one with an Indian of "high caste"? You're way beneath them - the British retain vestiges of their old caste system, but it started to be demolished just over a hundred years ago.

Well, we all know how that feels, don't we? Win an empire, lose an empire (one of the above countries is heading out again, as I'm sure you've noticed. I've always fancied being colonised by my evident superiors, and I'm sure that's your secret fantasy too).

(Amusing: we're still fighting something which is more a concept than a reality, while ignoring a bleeding obvious reality. Sorry, is that the time? Golly. No, don't get up, I'll see myself out.)

Oh yes. Rhyece and Kali Jade appear on the cover, posing on the bonnet of their apparent pride and joy, a 1970s something or other (if you really thought I'd know the name of this you're nuts; the indicators are kinda on the top of the front bits - I know! aren't I technical! I never did understand that excitement for cars once I turned six).

Also, if the industrial lot across the road on the cover is any indicator, these two are either in a really untermensch area or - as some friends of mine once scored - the only old house in a new industrial estate. Which means Rhyece and Kali can record, practice and generally carry on like a couple of skunks at high volume to their heart's content.

I know what you're thinking. Sounds sweet!

There's delicacy, precision; no one instrument dominates - the idea has clearly been the focus on the songs, their content, and let the rhythms, the tunes follow. Rhyece's style of music at first seems obvious - put Jeffrey Lee Pierce, Cave, The Wreckery and maybe a dash of P.J. Harvey in a blender.

But on repeat listenings... nah. The 'obvious' comparison comes because, like Hugo Race or Spencer P. Jones, they've independently investigated the same sources which the Pierces and Caves of the world have made better known. And, of course, come to different conclusions.

"His Burning Chair", the fifth track, would not appear out of place on a Wreckery LP, nor a Cave LP, nor even a Hugo Race LP. It really is brilliant - and, I might add, it's a bit surprising that local record labels haven't pounced.

Actually, if anything, Rheyce completely owns this; it's entirely him. I'd like to see this played live, just to see how he handles things.

All I can say is, Australia still produces some of the best, most involving music in the world. And as a famous breadhead once commented, 'the world won't listen'.

"Ubermensch Blues" grabs you first time and you'll be returning over and over. It's a sound investment, if not essential.