Up There Cazaly: What a load of balls 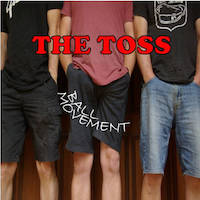 Ball Movement - The Toss (self released)

Hello I-94 Barflies. As always, the old Farmhouse has been rocking loud, and these past couple of days it’s been to the sounds of The Toss, those fun-loving and football-crazy nuts from Adelaide.

“Ball Movement” is CD’s the name and whether taking the piss or draining it is their game, this puts them right at the top of the ladder. It’s the seventh album for The Toss, following hard on the heels of the highly acclaimed “Full Support Of The Board”. This is a masterpiece of Australian Football songs but before I bounce the ball and start the review-proper, I think you need a "Footy Record" account of who's who.

Sitting at fullback is drummer Brett Chappy. He’s one of those fullbacks who will let you kick two goals on skills but will punch you in the back of the head, trying for a third. Be careful; he hits bloody hard.

Sitting in the Center so he can show all his flair and skills (he’s a bit of a show off) despite never laying a hand on anyone in a tackle Is guitarist, vocalist and all-round goodie two shoes, the one and only Tony Toss (not to be confused with Dusty.)

Sitting in the foward pocket hanging off the full forwards’ back like slag - he’s waiting around for the easy goal and sporting dyed blond, braided hair to attract a few Brownlow votes - is Chris Toss. on bass and vocals

Punters, this album is a good bet; seriously, you cannot lose. “Ball Movement” is loud. Punchy and dirty, It’s white line fever all the way - so let's run through the banner and break some legs.

Kicking off is “And He Says”. It’s first bounce straight up with some good tap work. Next is “Nothing” and it’s a wonderful tune. “Loss of Substance” just fucking rocks like the playing surface at Ballarat footy ground. The lesson here is that gravel and footy don't mix.

“Commentator’s Curse” will give you a stich from laughing…a bit like watching Port Adelaide play.

“Front Bar” is a tune that most middle aged single men who sit on the pine will understand. “Running up The Pack” “Score Review” should be sent to another Tosser address, care of the AFL.

And if we are going to win this game, well, we all need to sing the anthem, “Up There Cazaly”. It’s not the Mike Brady version on acoustic guitar, smile fest, million-dollar song, This is the “I'm gonna fuck you up” version played fast and hard. It is pure gold.

“Ball Movement”: From the first bounce to the final siren sounds, it’s a winner. But if you wait around after the game is over there is something very special to be heard. Just have a beer and wait.,Ooh baby baby, It's worth it..

The Farmhouse has waved the flags.