Glorious stories from one of the quiet ones

Written by Robert Brokenmouth on 05 December 2020. 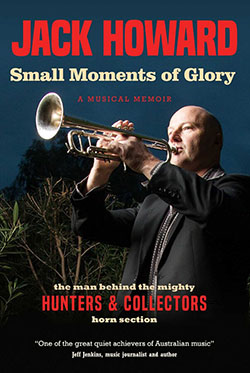 Another in the Best Books I've Bought All Year Category.

Jack Howard kept a journal from before he joined Hunters and Collectors, and through most of his career with them; his horn work with other musicians predates Hunnas, continued while he was with them, and continues now. Clearly it's a life sentence.

Jack Howard avoids innumerable pitfalls by presenting a book which is purely one thing: older musician looks back on his life with accuracy and smarts, confesses that his early years were riddled with angst and neuroses and, clearly recoiling from his diaries in horror, declines to share the cringeworthy evidence. Instead (and instead of making up some cool-sounding mythology) Jack just says that it happened. And he moves on. Something we could all do well to remember.

"Small Moments of Glory" does not tell Jack's story from the perspective of a (cue neon sign, huge throbbing cathedral organ and scantily-clad models) ROCK GOD, but of a bloke who plays an instrument and starts playing in a few bands and, after a lot of hard touring and yakka and angst, one of these becomes a significant part of our country's backdrop.

Here's the story of real life in a rock'n'roll band, the actual simplicity of it, shot through with emotional pressures and physical realities.

He skips the stuff he figures you already know, presumably also figuring that we don't need him to tell us all about a period we were probably there for anyway. In fact, there's only one thing he doesn't explain and that's because 1) he's a horn player and it's a bit like explaining something he figures is so obvious everyone knows about it (no, Jack, most of us don't have any idea about an embouchure) and 2) explanations clog up his breezy narrative.

For those who don't know: "embouchure" is "the way in which a player uses their lips and face muscles to produce sound from a brass or wind instrument" (Cambridge Dictionary). Which sounds quite boring, until you realise that blowing, say, a trumpet, involves a lot of spit coming back down the tube, and not letting the bloody mouthpiece slide all over your face, and making a sound like an elephant the morning after a night on the razzle and curry.

Fun fact: if a musician can't get the embouchure right, they're tempted to cheat. In order to keep the trumpet in the right spot, Louis Armstrong carved grooves in his mouthpiece, which cut the inside of his lips. If you're an Armstrong fan, you'll have seen pieces of footage where he wipes his face with a large white hanky. Sometimes he clearly wipes his mouth as well after playing. Sometimes that was to mop up the blood. ... go here for more.

While thisis a problem for innumerable horn players, Jack clearly had some excellent teachers, so that's not a major issue with him.

There are moments when I envy the man. Early on, he saw Hush, Elton John when he was good, "Welcome to My Nightmare" Alice Cooper, and his school big band supported AC/DC. He knew the Cosmic Psychos before you did, supported Simple Minds when they were good (oh yes they were), and jammed with Can. And, infuriatingly, seems to have lost the fucking tape.

What a bastard, right?

But no, Jack Howard is such a gent, sometimes he even apologises for what he's writing. "Small Moments of Glory" is one of the best books on a rock'n'roll band I've ever read, mostly because of Howard's simple realism, and his ability to square up to his own dorkiness (he sets the scene early by referring to himself as a 'coarse suburban boofhead').

There's his picture as a young man on page 1.

Is that a mullet?

The band took a couple of cabs to the Toucan, and, full of piss and vinegar, called the owner a "fat cunt". For some reason, the owner and the bouncer wished to discuss young Jack's opinion in greater depth.

The band grabbed him and the band got away.

They say it's always the quiet ones.