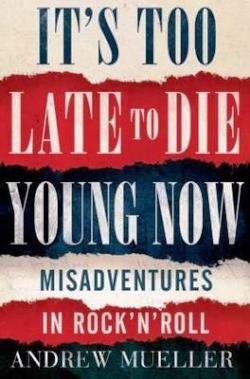 At this point I have to dip into my own bucketful of rock and roll stories. The most stressful gig I did was also the first live review that made it to print. Yes, it was my worst gig. The review was by an 18-year-old Andrew Mueller for On The Street magazine.  I had a makeshift version of my band. My guitar player had had a liaison with a girl who was a friend of the bass player - and her boyfriend was a member of outlaw biker gang.

In his crazed “biker on speed” rantings, the cuckolded party declared that my band was a cross between Guns and Roses and KISS, a living sexual beast with an animalistic penchant for stealing every woman it could on its world tour.  In reality we were a unknown indie rock band with no more than 10 people in our audience. In his rant and threats, however, we all had to die. He was going to shoot everyone in the band and all the punters at the gig were going to be beaten up.

Welcome to Randwick Racecourse Hotel on a Saturday in July 1988: My bass player did not show. Nor did the biker and nor did his shotgun. The guitar player kept hiding in the toilet. The show goes on. It was shithouse, as I attempted to play the songs Cramps-style after a fashion. It meandered into a mess with Stooges songs colliding with "Goo-Goo Muck" as well as the originals.

Mueller actually gave us a warm review - he was downright sympathetic and said the band had something. He gave us a really positive review for our first EP six months later (with a more stable line up.) I am sure that if he knew the real story, it would have ended up this book.

This was in Andrew’s career, when he started writing reviews for fun and posting them off to On The Street, Sydney’s free weekly magazine.  His first review was  Ed Kuepper at the Mosman Hotel 1987.  He was amazed when he picked up the rag and saw it published. Over the following months he began regularly reading his reviews...the thought never occurring to him that he would be paid.

Margaret Cott, the editor, eventually tracked him down. Informing him, that he had a cheque waiting, she asked to meet him. He turned up and was handed a bunch of records and offered his first feature interview. Within 18 months, he’d dropped out of university and was assistant editor, going to gigs four nights a week, writing features and countless record reviews.

Mueller was a new voice for Sydney music with his teenage smugness and arrogance rejecting the post-Radio Birdman legacy as well as Aussie pub rock.  Frantically writing 10,000 words a week, the bands he raved about were people like The Hummingbirds, the Half a Cow label acts, RatCat and all things Flying Nun from across the Tasman. He also liked to champion unknown, obscure bands and debut singles when he believed heard genius.

Mueller repeated the same pattern with Melody Maker in the UK, sending in his reviews.  Melody Maker and New Music Express were highly influential magazines selling hundreds of thousand copies.  Unlike today: Melody Maker folded in 2000 and NME has been reduced to a giveaway publication. To his amazement, Mueller was published by one of the world’s leading rock magazines.

It was his hammering of U2 at the Sydney Entertainment Centre in 1989 that made an impact. It was such an intense dressing-down that the magazine was full of letters attacking him for weeks. How dare him he attack the sacred cow? He was eventually again tracked down, and then a phone call came from London from the Editor of Melody Maker. There was another cheque he needed to collect.

Mueller had just turned 21-years-old and he headed to London where he was offered a full time position with the legendary magazine.  This is where the real story begins of “Almost Famous” for Generation X in this page-turner.

Mueller is thrown to the wolves of the British music scene.  There's his encounter with Mark E Smith that starts out as expected with Smith at his cantankerous best and ends withy them becoming drinking buddies. Mueller goes on to cover the upcoming bands. Many that never made to Australian shores.  He asks why is it that the people whose music he really has no time for - like Alice Cooper and Ian Gillian - turn out to be intelligent and complete gentlemen? He was not scared to pull the mask off those he thinks are the wankers, whether he likes their music or not.

Mueller goes into details explaining the machinations of the how the music industry works, in particular the music press. He never paid for airline tickets or hotel rooms.  It was all wheeling and dealing behind the scenes   Declaring to his editor that a band needs coverage and ringing the label and arranging and them to pay all expenses right down to the beers in the fridge. If A Rock Journalist was smart, he would end up in exotic locations.  Mueller lived the life.

That was how Andrew first ended in NYC to interview the Violent Femmes.  Along the way he ended up on tour with The Cure, watching the Goth pop icons transformed into nasty soccer hooligans from cabin sickness while touring across middle America.  It was also the chance to grab insights into what Mueller describes as blistering shows by the early Pearl Jam. Mueller eventually saw all corners of the USA, from Salt Lake City to LA and to Middle America -  even Paris, Texas.  In reality, the record labels never paid the bill – it was always sent to the band, eventually. Mueller does not mention that.

Twenty years of writing copy for everything from soft porn magazines to The Guardian, Melody Maker and the NME means Mueller has mastered the art of spraying you with many ideas like an AK47 within the first 300 words. Yes, at times he's a wordy wordsmith, then at times his words hit you like a boxer's KO punches after a rally of jabs.  He really shines when his prose is fast and electric, making Kerourac seem like James Joyce.  Then he uses what I believe is a smart literary trick. He meanders and then likes to use a Thesaurus from 1865, not unlike pages of a Jane Austin novel, using obscure Old English words to impress. The mixture of fast copy, journalism and classic British 19th century writing is an interesting style.

It is also imbued with a sense of humour. Mueller is downright witty and, more to the point, insightful. Towards the end of the book, the Melody Maker ride was almost over. Andrew was in exile because he questioned the Riot Grrrl movement and on the outer with fickle office politics of the magazine. Once hailed as the boy wonder and rock scribe genius, after three years he was on the nose - like the latest U2 record.

He writes: “I made what I intended to be a couple of conciliatory calls to Melody Maker. These were received with the sort of enthusiasm which might have attended Leon Trotsky’s application for a podium seat in Red Square at a 1929 Mayday festival”.

More to the point, it illustrates that even as rock writer you can be hip and in vogue and the happening kid with your finger on the pulse.  Then, by your mid-20s, you’re not that cool any more. Andrew remained a talented writer and his taste in music remained the same. Not unlike the fickle industry which heralded bands for six weeks and dumped them a year later.  The Industry always was fickle but became more so as the years rolled by.

Mueller adores to throw bombs, declaring Pink Floyd as the worst band of all time with the exception of The Doors. He's into cutting down holy cows, including labelling John Lennon’s “Imagine” as the worst single of all time. I’m not sure if he serious but it is funny.  Then there are some insightful comments when examining British music of the early ‘90s. He writes: “American rock bands pay their dues, British people form rock bands as a means of avoiding theirs.”

This is a great read, a rare insight in the behind the scenes look at the British rock press, the snotty politics and the great characters of the time, all with a splash of humour.  It also describes the last wave of music that at least had some impact, from indie pop rock of the late ‘80s, from grunge to Britpop. Recommended highly.

Tags: andrew, mueller, it's too young to die