Written by Robert Brokenmouth on 07 December 2015. 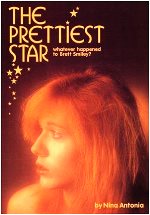 Antonia takes the breathtaking step of setting her own teen experience against that of the gorgeous Brett Smiley - and the result is stupendous. If anyone else had tried this, I’d say they were off their heads; of course, it is precisely because Nina not only was the target audience for Andrew Loog Oldman’s hitmaking, she fell heavily for Brett just after discovering the New York Dolls … and eventually met her idol. It was after their meeting that she realised that a comparison between their two lives would be extraordinary.

A simple childhood and that easy lope to self-definition is so commonplace, so ordinary, that when the process is interfered with by selfish adults, that the breakdown can lead the child almost anywhere. Of course, depending on the degree and nature of the interference, the child could become psychopathic, disturbed or worse. Depression is a co-efficient of the process as well, leading to the usual substance dependencies. The world is not as it is, and I am not in the place I want to be.

Antonia describes her own first steps into writing, as the only way to enter the world she is compelled to engage in, as “hard work making the words fit, like stringing a necklace with uneven pieces”.

“The Prettiest Star” is one of the two best-written books I’ve read all year (I usually average about six or seven per month) and easily the most moving. The link between youth, music (especially pop) and self-development has not been fully examined from the participant’s sides; here Antonia looks at both and we find ourselves as hypnotised as a rabbit in the headlights as she writes us down a path we could never imagine.

Utter fucking brilliance. This Christmas, give “The Prettiest Star” to both every adult you know who had a fucked-up childhood, and every adult who loved any glam record or boy band at any time.