Written by Robert Brokenmouth on 30 September 2020. 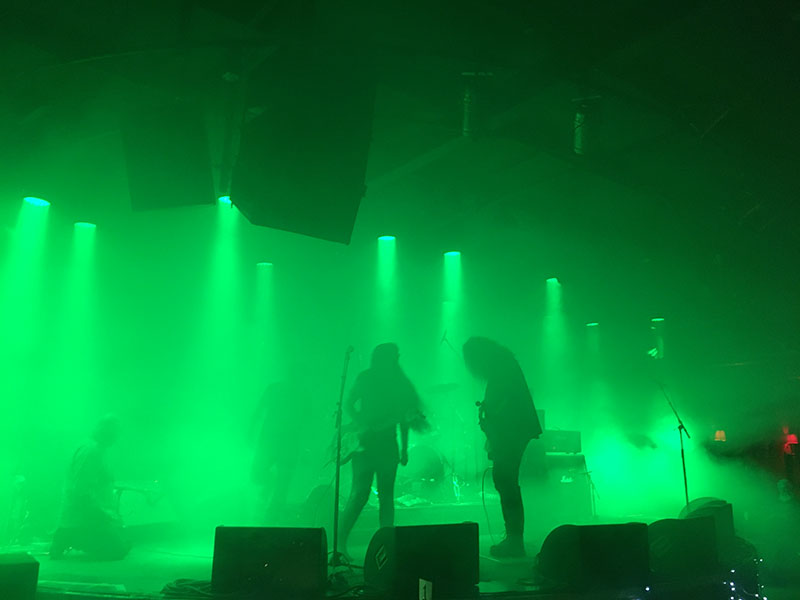 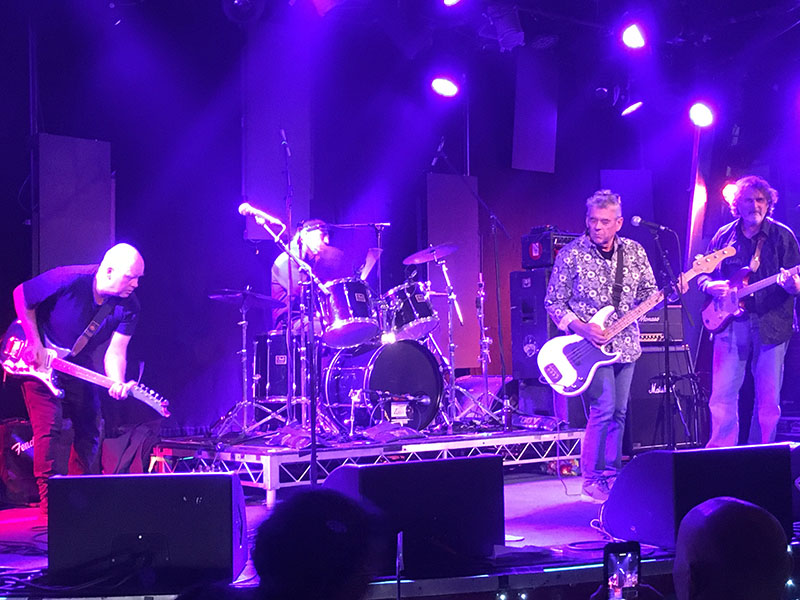 Across the road at the concrete monolith, the Ent Cent, a posh school is having its Year 12 formal. Ordinarily, you'd think at least a couple would sneak out, bored with the anodyne drivel passing for rap, and amble into The Gov. Not tonight, our Covid restrictions have us all limited to a table, allocated seating etc. Fortunately this has relaxed slightly in the last few weeks since Sarah Sarah organised this gig.

That's right, now Adelaide has three lady band-bookers, Millie Bands, Philippa Elliott and now Sarah Sarah. Each loved and respected by (mostly male) bands who somehow can't get it together to organise their own gigs. It is, of course, a labour of love - these women ain't gonna make their fortune here.

Fed up with seeing The Gov's big, tempting stage with its new, shiny and loud sound system, and the new tempting whizzy-bang projection screens, Sarah decided to organise a gig so that her new band could play. And all her friends. Of course, everyone who was asked put up their hands, so there were 7 bands. The gig sold out, and every musician went home with more than cab fare.

How much did it cost? About the same as it used to cost to see The Sputniks play the Union Hotel before they moved to Melbourne and became The Moodists. $2. Well, effectively less, because back then $2 would buy a schooner with change, three pints of milk with change, or 11 postage stamps. So $10 is rather less than 10 postage stamps, and you still get change if you buy three litres of milk or a schooner (or a pint, even).

Now, as this is only a partial gig review, I promise to be quick.

Arriving at the tables, we behold a variety of gifts, including a paper plane maker, bubble liquid and ring, a gooey thing, a stag on a skateboard and one of those weird glo-wands. 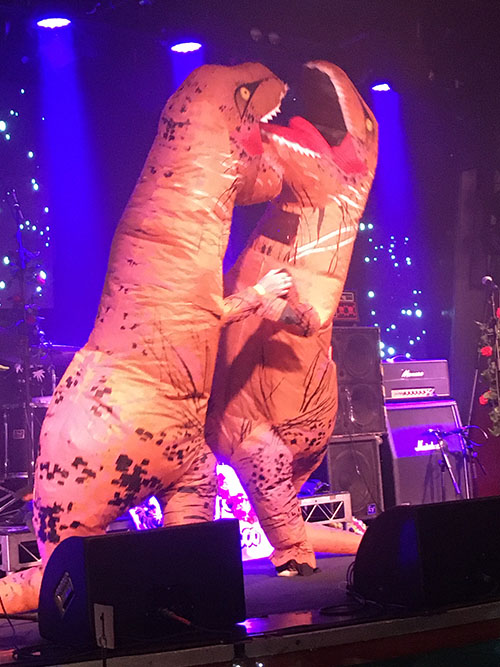 Once we've digested this alarming information, two T-Rex’s waddle out from the wings and dance about solemnly, rather like a pair of over-sized ... no, I know what you're thinking and it's disgusting.

Anyway, this was the organiser, Sarah Sarah, and her hubby, Hermann.

First up is three-piece Surfer Rosa, who sound nothing whatever like the band you're thinking of, and have a series of frisky tunes and a flash guitar sound. You'll love them - they're distinctive and no band plays like them. They closed with the theme from Aunty Jack, featuring some bloke in a frock and Doc Martens. 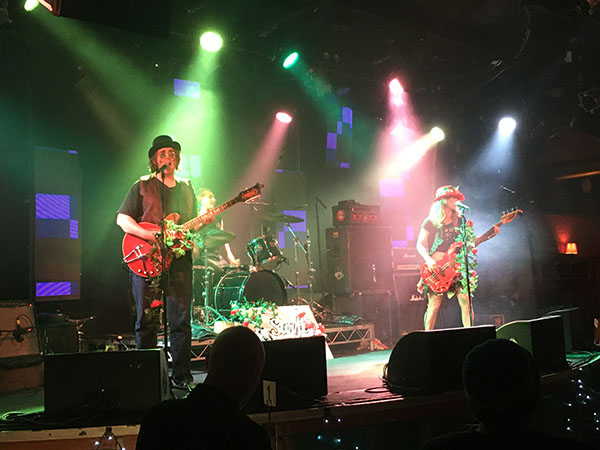 Second up are The Rip-Offs, Sarah and Hermann's new band, and I must say I was gobsmacked. Fully-heavy stuff, with Sarah on vocals with songs like "Here Come the Tears", an epic monster entitled "Why Do You Have to Be Such a Bitch" (dedicated to some unfortunate called Tanya), "Cunt Force Trauma", and two covers - a damn fine version of Violent Femmes' "Add It Up", and Salt'n'Pepa's "None of Your Business".

Lumpsucker played an equally heavy, powerful set, with one of the singers dedicating their set to David Norris, who passed away recently. A lot of my friends knew the man well, and this loss has hit them. Again, Lumpsucker are distinctive, and no band sounds like them.  but also pester this chap for CDs

Chainsaw Preachers were up next, and it was about half-way through their set then that I realised I probably wasn't going to last the rest of the night. First, all the bands were using the same gear, and Hermann appears to have had his bass rig fixed (from one speaker working back to four - one speaker used to leave people dribbling on the floor), so my left inner ear was wobbling a bit.

The Preachers are damn fine, another tough three-piece with a consistently punchy bass and fine fingerwork from the guitarist. Get your tshirts and stubby holders here.

So I took myself outside to give my ears a break, bumped into an assortment of folks I'd not seen for a while, while The Toss (here's a reminder review) hammered the crowd into a puddle. Another huge three-piece.

The next bands were Perdition and Fear and Loathing. Both bands have CDs and whatnot available - When they were moving house FAL found a few of their older LPs, too, so if you like vinyls ...

And I missed them, because, while I was outside, I realised my eyes were closing (and yes, it was quite early at only 11) and I had to drive home. So I tottered round the room saying goodbyes, realising as I was leaving what a wimp I was, and that there were folks in the darkened corners of the room I hadn't connected properly yet, and drove through the night with the windows down to keep my eyes open.

However - both Perdition and Fear and Loathing are a joy to behold - Fear and Loathing, because 'they've always been around' don't get the awe and admiration they deserve. They pre-date The Mark of Cain, for example, and that band always packs out. Personally, I'd rather see Perdition or Fear and Loathing, both have more of the unprofessional bite that I prefer. Perdition are in that great tradition of early 80s UK punk (which doesn't realise it's actually powerpop), so you can dance yourself stupid; and FAL are, to cop a phrase from one of their LPs, not so much heavy as awkward. And they're brilliant.

I've put each band's contact FB page or a review above - apparently merch/ CDs are available. Also, I am told, THUMP 2020 t-shirts are available from here. After putting up with lockdown for so long, you deserve a treat, don't you?

Oh, sorry. The stag on a skateboard - that was a pair of small plastic toys glued together. Did you think ...? No, surely not....