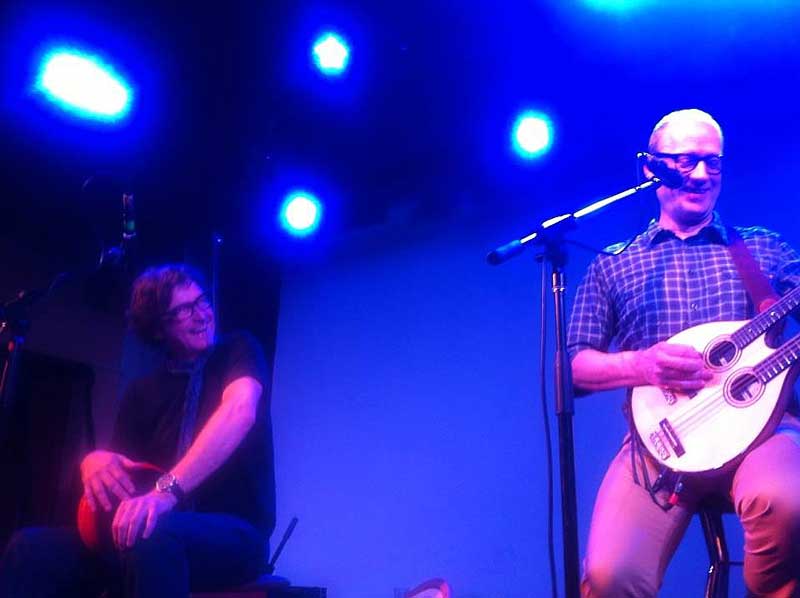 After all, there’s no free drinks, T-shirts, merch or coke.

As we stand outside in the Gov’s carpark, urban 4WDs brushing our ankles as we wait for the doors to open, I think back to the many times I’ve done this over the last thirty-mumble years. One of the passengers eagerly winds down her window.

‘This looks exciting! Who are you waiting to see?’

Mildly irked, we explain, not without a certain insider’s contempt.

She looks cheerful. ‘That sounds great! Well, I hope you have a good time!’ And they drive off.

That sounds great! And off they go.

It wasn’t a money thing.

A can’t quite be bothered thing.

Maybe if it was someone more famous here in Australia.

A Twerky award winner or something.

The Gov did a huge refit a few years after the Birthday Party came through. Then another in the '90s. It looks great. It feels big, but snug; spacious but intimate. The food is good. They can have two gigs going at the same time, and often do. It’s very comfortable.

Knowing the time the headline act is on helps, so people can go home from work, have a reasonable feed, change and head out.

I haven’t seen Brillig for ages so I make sure I see Brillig. I am grubby from work and two bolted cheese and branston pickle sandwiches (made by my fiance who is blessed with patience most of the time). Their latest album is "I Ain’t Ever Gonna See the Sea" and you can pester them here for a copy or follow them on Facebook.

Brillig seem to have been around Adelaide for quite a few years; thankfully they haven’t stayed here all that time - their overseas trips have been very successful (er, Europe, not Tasmania. Or Kangaroo Island). Their recent season at the Fringe sold out - they don’t get mainstream airplay and I can’t believe the triplejays of the world know Adelaide exists. Which is fine, but I doubt radio comprehends the rest of the world apart from a limp concept.

People all over the world like Brillig a lot. They’re good live, engaging, and use a variety of instruments to broaden the sound and lay emphasis to their lyrics - autoharp and accordion, banjo and uke feature as do the inevitable guitar and bass… no drums, which suits them perfectly. Kinda sea shanties, cowboy songs with seductive folk and a dark heart - all of which is set more or less here. In Adelaide. Which has an absolute abundance of nasty little secrets. And most of the crowd has gathered by the time they come on, which tells you something. It’s Tuesday night, for chrissakes. The crowd feel a deep affection, and a deep affinity for these people; Denni, Elizabeth and Matt.

Speaking of which. The reason I don’t like this job is that - and it may just be me and my bad taste - but I didn’t like ‘em that much. I won’t go on - but they’re a band who are popular for a reason and you should make your own mind up, as many have.

A thing I may have mentioned is that I really dislike this pandering back to an era at the expense of the present. I particularly loathe shows like spicks and specks, with its dreadful bingo-like nostalgic fuzziness and air of self-congratulation. NO, not just the current show. The old one too.

I like covers when: they either do it differently, bring a new energy or meaning to the song, or, if you must, spectacularly badly (Bob Short recently put up an audio snapshot of Filth in their, er, heyday, which fits one of the criteria above; The Four Stooges do a magnificent stage show of Iggy and the Stooges pre-Raw Power which eclipses every cover attempt of the Stooges I’ve ever seen or heard).

But, we all remember the fucking '90s and Zero’s where the cover band reigned supreme and it was still illegal to murder the people deliberately booking these note-perfect cover bands. That’s not to say they had no skill or talent, these bands, but that they chased the dollar first and what with pokies and drink everywhere like lawns in Caulfield we no longer have much of a scene.

A music scene is like a library, you walk through the stacks and stumble on stuff. No matter how the random function on a computer is programmed, it ain’t the same.

Ade Edmondson, star of film, stage and telly, has noticed a niche. Quite, I believe, by accident (if you call drunkenly purchasing a mandolin in a pawn shop an accident). Like all of us of ‘a certain era’, we know that the lyrics and meaning of so many of the songs in the '70s and early 8ts had an extraordinary sensibility, a vividness of experience. Oddly, few have been covered, and even fewer successfully. It’s really, really hard to imagine a new take on anything by the Sex Pistols, they’re so pivotal and rooted in their time. Or the Clash, or the Jam. Ian Dury, the Specials.

I think the key is that Ade has a reasonable singing voice, and his experience as a performer means he focuses on the meaning behind the lyrics - and enunciates clearly and with intent (if not malice aforethought). Ade also has the background - before he got into comedy he was there in Bradford and nearby Manchester as ‘punk’ exploded with the Pistols, the Clash and the Damned and began warping into what the lazy press then described as ‘new wave’ and what we now lazily call ‘post punk’. Since pigeonholing is the forte of academics, let’s just ignore those bastards and enjoy the music, eh?

So. The Bad Shepherds have released three CDs - the first (Yan, Tyan, Tethera, Methera! - ie, 1,2,3,4!) seems to be out of print, while "By Hook or By Crook" and "Mud Blood and Beer" are still available. They are, how to say this? Fucking fantastic.

So, at the time these songs were first made and presented to the world, they were part of a huge, disparate and extraordinary movement, the breadth of which eclipsed the sixties (even though the dynamic sixties were a huge, huge influence) (don’t believe me? Take the first LPs of these bands and stack ‘em up, one for one, against any first lp of any 6ts outfits you like inside a similar three year time period - The Pop Group, The Gang of Four, The Human League, XTC, Ian Dury and the Blockheads, Dexy’s Midnight Runners, The Sex Pistols (ie, the Spunk lp), the Slits, Joy Division, The Jam, The Selecter, The Buzzcocks, Siouxsie and the Banshees, The Specials…)

I, erm, seem to have digressed.

But no, not really. Seeing the Bad Shepherds is like seeing these fine songs, and their original vocalists, wearing only a towel after stepping out of the shower. I won’t go through the setlist cos I can’t remember it all, so in no particular order…

Down in the Tube Station, God Save the Queen, What a Waste, Sound of the Suburbs, Making Plans for Nigel, The Model, Whole Wide World, Going Underground, Friday Night Saturday Morning, Our House, White Riot, Gary Gilmore’s Eyes, Anarchy in the UK, Road to Nowhere, London Calling, Rise and a new addition to the set, Girlfriend in a Coma.

I venture to suggest that most of the audience would’ve had a passing familiarity with most of the set but I can tell you this, most of us there would not have heard them all as they came out, full of stylised piss and vinegar. Stripping back these songs back to their guts, humour, romance and fury is one of the most astonishing, wonderful things I’ve seen on a stage (and I’ve seen some complete and utter bollocks, let me tell you).

And they make it seem so easy up there. Troy Donockley works his backside off, swapping his uilleann pipes, cittern, whistles and flutey things about; watching him frantically struggling to put one instrument away while singing and tying on the pipes (they look like a Dalek’s bagpipes, if you must know; either that or made from a Dalek’s pissy cannon arms and a fuzzy Dalek spleen and a leathery Dalek bladder), or, worse, singing, untying the pipes and grabbing up the whistle or flutey fucking thing… jesus, Troy looked like he needed a drink by the end. 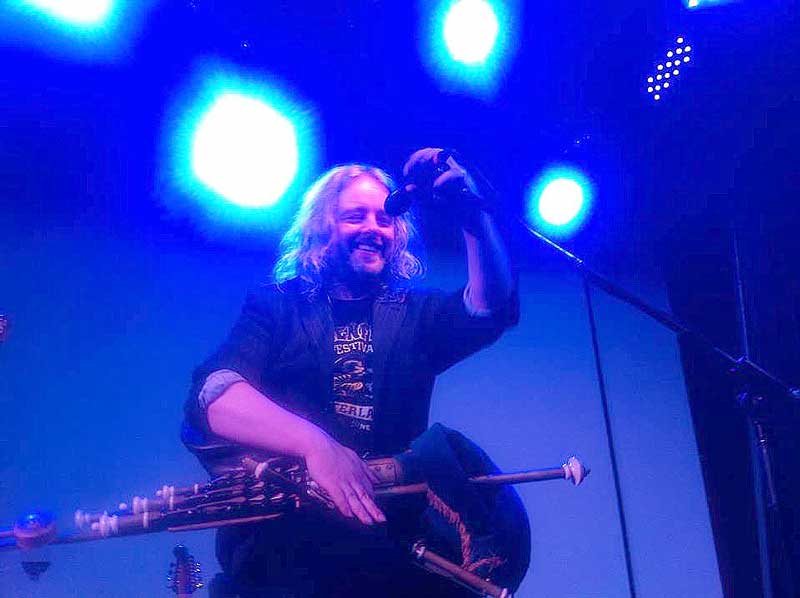 Troy Donockley of The Bad Sheperds and that Darlecky thing.

Terl Bryant sat on a cushion on a box which… was the percussion. Marvellous creation this, there’s a foot pedal but mostly Terl uses his fingers, hands and sandshoes…

And our hero, of course, with his twin neck mandolin (‘ordinary’ and 'octave' mandolins) which, once you get past the idiot Jimmy Page comparison, makes perfect sense for the songs because Ade swaps between the two mandys effortlessly; essentially the band has a greater breadth because Ade had the thing ‘custom made to save weight on tour’.

So. Were they any good?

By Christ they were fabulous.

They took us by storm, treating us to a world we may have rather missed, lyrics which swept by us, in an intimate emotional storm. The bellows for encores were close to being the loudest I’ve ever heard at the Gov, and that was because for once almost everyone in the room was howling for more - you know how there’s always about fifty people begging for the encore and everyone else just can’t be buggered because you know they’ll come back? Wasn’t like that tonight. We weren’t sure. But they did - just two songs, then skipped back to their dressing room clutching illicit beer and a bottle of pepperjack like naughty, grateful children.

We loved them, they loved us. Rather a superb night out.

I do hope you didn’t miss them. If so - 1) contact the BDO - or the festival of your choice - and demand they bring the Bad Shepherds out next year; 2) visit the band’s website http://www.thebadshepherds.com buy the CDs for people you love who have never heard them, and pester the band to make up tshirts so you can show off.

Oh, and 3) make sure you don’t miss them next time. Because they will return to Australia - Ade’s first visit to Australia was before The Young Ones hit our shores… they must like the place…