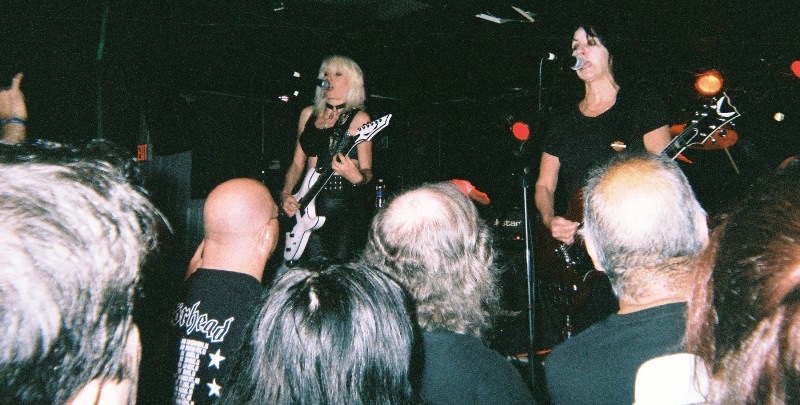 It was with great interest to learn that Girlschool were doing a tour of the U.S.A. Evidently, they haven't toured the U.S.A. in over 20 years. When I discovered that they were playing a date in Kansas City, I decided to go.

Girlschool are touring with Crucified Barbara from Sweden. There were also two other acts as support.

The Scene is located on the far east side of Kansas City.

When we arrived for the show, Crucifed Barbara were just finishing up. They did sound pretty good. The club itself was a very nice venue in terms of how it was laid out. There was a large dance floor with an elevated area and there was a game room as well. It's a nice environment to see a show.

During set change, I noticed that Girlschool were in the game room playing darts.

After a short time, Girlschool made their way to the stage. They started off with a driving version of Demolition Boys.

Throughout the set they played many of the old favorites that you remember, including “C'mon, Let's Go”,
“Yeah Right”, “Screaming Blue Murder”, “Hit and Run” and “Race with the Devil”.

They also did a great version of "I Spy" from the Legacy album that Ronnie James Dio sang with them.

In addition, they played a couple of new songs from their forthcoming "Guilty as Sin" album. These songs had a real consistent sound. I'm looking forward to hearing more of the new album.

The band has a great stage manner and get on well with their audience. Jackie Chambers exhibited that Brit sense of humour which is so endearing. Kim McAuliffe and Enid Williams share an easy going camaraderie that shows two old friends who enjoy each other’s company. Denise Dufort was smiling from behind the drums.

They concluded their set with a blinding version of "Emergency".

Afterwards, the band was in the lobby talking with the fans. They were happy to take pictures as well as sign the various recordings that the fans had with them. I had the good fortune to speak with the bass player, Enid Williams.Ms. Williams was cordial and friendly. She has a way of putting you at ease. Come to find out, she is a professional astrologer. She's been practicing for over 30 years.

All in all, we all had a wonderful evening together. It was well worth the four-hour drive from Tulsa. It's always great to see a band that you really want to see. Girlschool far exceeded my expectations.

Girlschool are an established band and we're all familiar with their work from the past. However, what they're doing now is more of interest to me. If they should be in your neck of the woods, go have a listen for sure. You'll see what I mean.